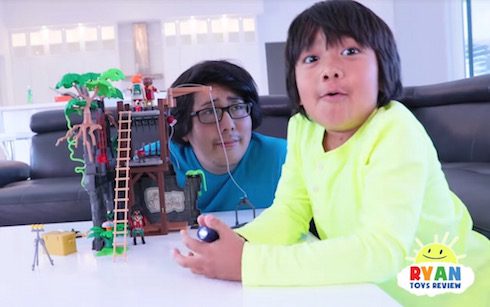 THE BLEMISH – The top YouTube earner for this year and beyond is a seven-year-old boy named Ryan whose channel features videos in which he plays with and reviews toys. Ryan has 17 million followers and made $22 million last year

CELEBITCHY – There were brief and strong pushes for both Patton Oswalt and Gritty, but the 2019 Oscars have chosen their host: it’s Kevin Hart

THE BLAST – Angela Ponce, Spain’s contestant in the Miss Universe pageant this year, is apparently the heavy favorite to win according to onling bookies (for comparison’s sake, her odds are more than three times better than Miss USA’s)

VOX – Here’s a helpful rundown on the ongoing controversy surrounding Priyanka Chopra and Nick Jonas’ brand-tastic wedding, which may itself still be ongoing

REALITY TEA – In a master stroke of reality TV narration-changing, RHOBH star Kyle Richards acknowledged the work she’s had done on her face while shooting down rumors that she’s gone full facelift

JEZEBEL – And in a master stroke of benevolence, here’s the story of how two senior citizens from New York wiped out $1.5 million in medical debt belonging to strangers “just because they felt like it”

LAINEY GOSSIP – Brangelina is now done and over for good, officially and legally. Apparently their custody agreement states that Brad starts out with less than 50% custody but that he can gain “more and more” over time

DLISTED – Netflix, which apparently prints money almost as quickly as it does new shows, is going to spend $100 million to keep Friends after reports surfaced that 2019 would be Friends-free