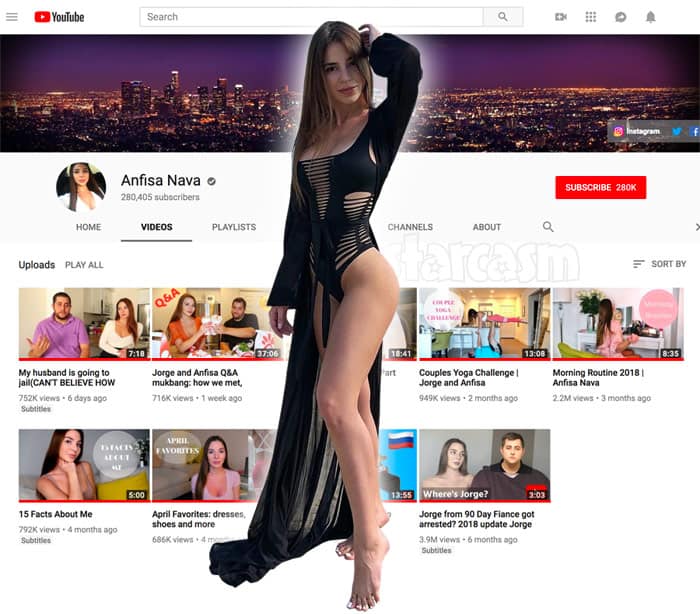 90 Day Fiance star Jorge Nava got a heavy dose of reality last week when a judge handed down the maximum possible prison sentence of two-and-a-half years for felony attempted transportation of marijuana. With Jorge’s earliest possible release being July of 2020, it seems very unlikely that the fan favorite couple will be returning for a new season of 90 Day Fiance: Happily Ever After. The seemingly dire economic situation for Anfisa Nava is expounded by the fact that she is currently a full-time college student. So how is she going to get by financially without Jorge (which actually doesn’t mean much) and potentially without a TLC paycheck? Given her huge success on YouTube, she may not have to worry!

Anfisa launched her YouTube channel back in February with a video featuring Jorge and addressing his February arrest in which Arizona police pulled him over with close to 300 pounds of marijuana in his rental vehicle. The video was a huge hit, and has since garnered close to four million views. FOUR MILLION!

Since that video, Anfisa has uploaded eight more clips with an average (including her first video) of more than 1.37 million views each. That is an INCREDIBLE average, even figuring in the fact that Anfisa has only been uploading an average of a little more than one video a month.

For those of you thinking that Anfisa’s success so far is mostly a fluke and based on the fact that she was serving up tea for a hugely popular show — which she may no longer be on — let me make a few points:

1. The quality of Anfisa’s videos is really phenomenal. She has talked about the fact that she edits her own clips and explains that the reason for that is because she wants to have complete control over what people see and what it looks like. As evidenced by the results, Anfisa is obviously very talented at video editing and has a remarkable eye.

2. In addition to video editing, Anfisa clearly has a knack for marketing as well. She has done her YouTube research and knows what kinds of topics attract viewers — even those that may not be familiar with 90 Day Fiance. Among the popular terms included in the titles of her first nine videos are “morning routine,” “mukbang” and “couples yoga challenge,” just to name a few. To sum up the first two points, Anfisa isn’t someone who uploads jittery, poor quality cell phone videos of herself working out and cooking every day.

3. Anfisa is all about that dollar! You can tell from Anfisa’s video that she is very aware of monetization (aka ads). In her 37-minute-plus video “Jorge and Anfisa Q&A mukbang: how we met, proposal, 90 Day Fiance, money issues” Anfisa has multiple ads strategically placed throughout the clip, and you just know she is plugging the revenue results into a spreadsheet and crunching those numbers on the daily! 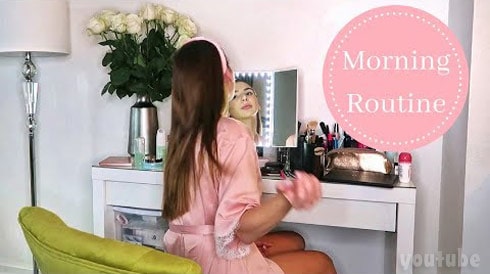 4. Perhaps the biggest indicator that Anfisa has a viable future as a full-time YouTuber (aside from the raw viewership numbers) is how those viewership numbers are distributed. If her success was mainly due to her posting about topics of interest to viewers of the show, then you would expect the numbers to match up — which is not the case. Her second most-watched video is her “Morning Routine” video from May. That eight-and-a-half minute clip features Anfisa narrating her morning as she wakes up, makes the bed, exercises, makes breakfast, applies makeup, feeds her cat, etc. — and it currently has over 2.2 million views!

So how do these number break down as far as actual revenue? How much does a YouTuber make based on views? I spent a couple hours researching this topic, including conversations with a couple relatively successful YouTubers, and there is no clear answer. There are so many variables involved, including video subject matter, the rising and falling ad market, engagement (clicks), whether or not viewers skip the ads, and so on.

Even though it is impossible to estimate exactly how much Anfisa is making per view, my research tells me that it is possible to come up with a baseline that we can be confident about. The rough range for most ad-friendly YouTubers is 75 cents to $7 per 1,000 views. Based on the information and research available online, plus my conversations with YouTubers about Anfisa specifically, I feel confident that she will fall in the $2-$3 per 1,000 views range — if not now, then very soon.

So what does that mean? As mentioned above, Anfisa is averaging more than 1.37 million views per video right now, which means she is averaging just over $3,400 per video (based on a CPM of $2.50). It’s not difficult to extrapolate that out a bit and realize that if Anfisa uploads two videos a month over the course of the next year she would make roughly $81,600.

Oh, and I haven’t even mentioned that if Anfisa opts to do “sponsored” videos (and why wouldn’t she?), then she stands to make more than $10,000 a piece for those! (Sponsored videos usually require a certain amount of subscribers as well as content that lends itself to certain products. Anfisa has more than enough subscribers — currently 280,522 — to attract numerous businesses, and her channel seems perfect for makeup, fashion, home decor, and other kinds of products.)

Now, before you go off shaking your damn head about making money being too easy for sexy female reality stars or whatever, please remember that Anfisa is a rare case. As I stated above, I believe she is very talented at videography, and she combines that talent with marketing savvy — which is not a common combo among reality stars looking to launch their own careers on YouTube.

For comparison, let’s take Anfisa’s 90 Day Fiance: Happily Ever After co-star Paola Mayfield. Say what you will about Pao, but she has certainly got the hustle when it comes to trying to establish herself on social media — YouTube included.

Pao has been uploading videos to YouTube for roughly three years, with a similar average of just over one a month. For comparison, I will look at her last nine videos — which is the same number as Anfisa’s total so far with the same time frame (the oldest videos are both from February).

Over those nine videos, Pao is averaging just under 7,400 views each. If we run the same math at the same $2.5 CPM (which I think is a little high for Pao), the result is roughly $18.50 per video. And Pao is doing OK, relatively speaking!

Of course, we shouldn’t forget that Anfisa has close to a quarter million followers on Instagram as well, which could easily be converted into revenue via sponsored links and posts.

In other words, I think Anfisa is going to be just fine financially during Jorge’s incarceration — even if she isn’t invited back to the show. Actually, the argument could be (and I’m sure has been) made that Anfisa’s expenses might have gone down a bit without Jorge. 😉

So what do you think about Anfisa’s rather bright future as a YouTuber? Personally, I think it is AWESOME! Here’s a woman who came over from Russia as part of a popular US reality series infamous for heavy editing to make the cast members look bad. After initially coming across as a gold digging villainess, Anfisa managed to capitalize on her infamy with additional seasons (and reportedly large contracts — larger than some of her co-stars) before slowly but surely transforming her brand from a negative one into a positive one. And now, she could very well be able to make a living continuing to share her story on the internet — as her own boss in control of her own story! That right there is frickin’ America people!