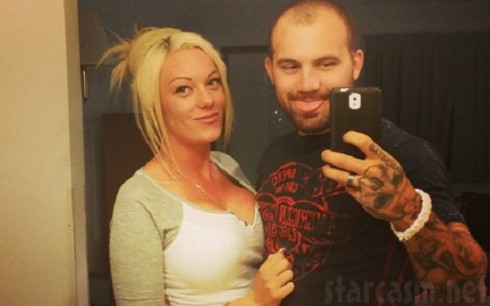 Another day, another Adam Lind report… this time involving ex-ex-girlfriend Jessica Nicole. As if Adam didn’t have enough to worry about with his long list of legal troubles, former flame Jessica Nicole filed paper work in an effort to add a(nother) restraining order against him.

According to court documents obtained by Radar Online, Jessica filed paper work on March 31 to obtain a restraining order against Adam alleging he assaulted her and has been “terrorizing” her. Jessica claims he “kicked open the door” and starting “choking” and “hitting her” as well as erratic behavior including “breaking things” and “flipping over the table” during an incident that occurred between the couple last year.

In the court papers, Jessica explains, “I was told…that he would come after my family and that he would ‘crush my skull. When I told him that would obviously kill me he said, ‘Oh well, I’d already be going to prison.’”

She also went a step further to include her teenage son in on the protection order. Despite her efforts, the temporary restraining order was denied due to lack of evidence, but there is a court hearing scheduled for April 28. Hopefully Adam will make this court date a priority since earlier this week he was arrested for failure to appear.

This isn’t the first we’ve heard of the bad blood between Adam and Jessica. Late last year, a whole slew of reports surfaced when Jessica called out Adam via social media for his abusive tendencies as well as his alleged steroid use– a claim Adam denied.

As we alluded to above, Adam’s other ex Brooke Beaton also filed a restrained order again him at the end of last year in order to protect herself and her family from his violent ways.

Thankfully, Adam has made at least one step in a positive direction when it was recently reported that he got a vasectomy.