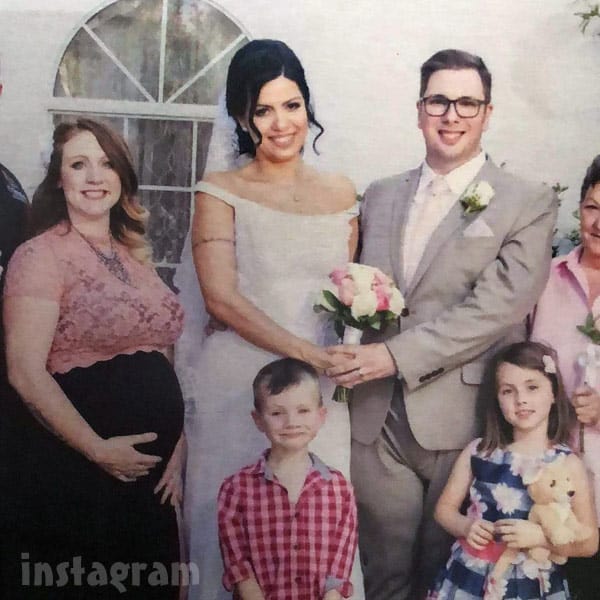 90 Day Fiance star Larissa Dos Santos Lima is having another jealous Instagram meltdown very similar to the one just prior to her arrest for domestic violence on November 10. Once again, Larissa is claiming that her husband Colt Johnson is taking advantage of his newfound fame by chatting up other women, but instead of posting a series of frantic videos of her self talking about it, this time Larissa is posting wedding photos! Oh, and talking about it.

The 32-year-old posted the wedding photo above featuring herself, husband Colt, mother-in-law Debbie, Colt’s pregnant (??) cousin Lea, and two children. In the caption, Larissa announced that she was taking a break from the internet before explaining that it “truly hurt me [seeing] my husband flirting online.”

She added that she “always cleaned his house” and “took care of him” before insisting that she is not a gold digger. As evidence, she reveals that despite the dramatic scene at the dress shop on Sunday night’s episode, she wound out buying her wedding dress for $150 at Goodwill.

Speaking of Larissa’s wedding dress, she posted a photo wearing it earlier in the day, before later deleting it. She explained that the reason she was posting the photo was “because my marriage is destroyed.” She then revealed that it may have been more than just Colt chattin’ up the ladies that drove them apart as she also points the finger at Debbie:

My marriage is destroyed because Colt mother drove me and asked me to left the car and I asked him to talk to her about it and he denied and blame me about everything. They don’t showed the truth about Debbie, the thing that happened with her we filmed this is the reason that I’m posting it she destroyed our marriage

Here is the photo of her dress: 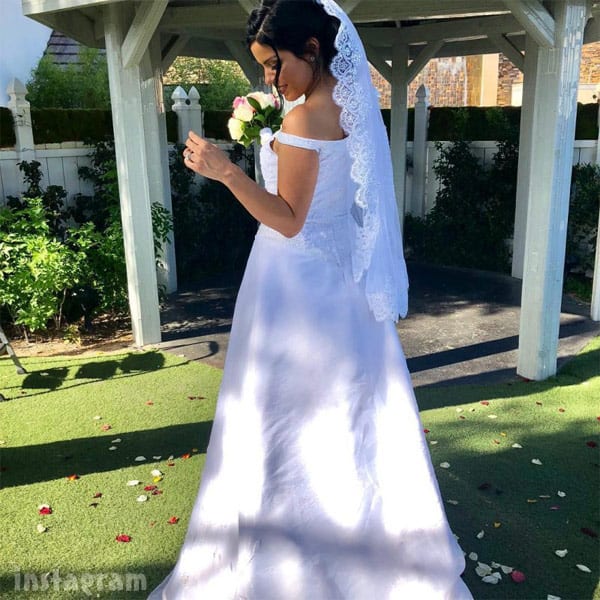 Meanwhile, Colt posted a photo of a broken pair of black glasses (very similar to the ones he wears) on Thursday before quickly deleting it. He captioned the picture by simply writing “broken cowl.”

Colt posted this and then removed it – I’m assuming it’s got something to do with last night and Larissa but who knows at this point with this cast. ?‍♂️ #90dayfiance

Many followers began speculating that perhaps Colt and Larissa had gotten into yet another physical altercation — and the broken glasses would certainly fit Larissa’s m.o. as both of her previous altercations included injuries to Colt’s face.

Prior to her most recent arrest in November, police officers who arrived on the scene observed “nail scratches” on Colt’s “eyebrow, left eye area.”

And according to the criminal complaint from the incident on June 19, Larissa “did willfully and and unlawfully use force or violence against or upon…a person with whom she has had or is having a dating relationship…to wit: COLT JOHNSON, by scratching the said COLT JOHNSON on the face.”

Here is an exclusive look at the criminal complaint: 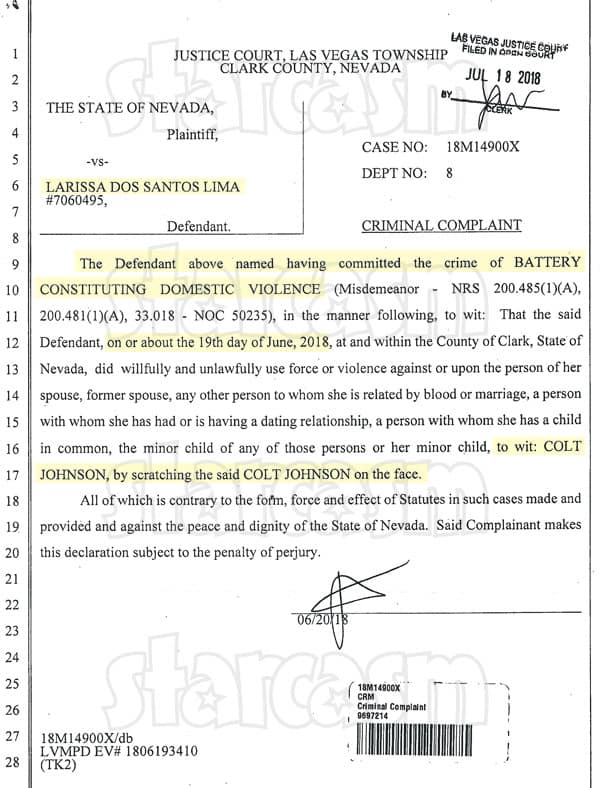 Amazingly, the wedding photo was taken just five days after the first assault described above! As we were the first to report way back in September, Colt and Larissa’s wedding was on June 24, 2018. Unfortunately, the photo with Colt has been run through the filter wringer, so it’s not really possible to get a clear look at Colt’s face.

In addition to posting the wedding photos on her own account, Larissa would also comment on the photo of the broken glasses above, revealing more about Colt’s alleged text wooing. “For someone who thinks of himself as so rational and calm he’s a f**king diva online,” one commenter observed. That inspired this lengthy response from Larissa:

Colt likes the women attention that he is getting.

Nobody believe when I said that he still flirting online.

I had access while I was looking his Dropbox, them he add the pictures two minutes ago after he went to downstairs to text her.
It’s sad because when he was alone I was there for him, now he doesn’t care anymore because he has options

COMMENT: he thinks the grass is greener on the other side, that’s not always true. But you’re right, you were there for him when he was a no one. Now he “thinks” he can do better. His true colors are showing. Sorry things are turning out so horribly for you.

It seems that Larissa also provided receipts in the form of screen caps sent to John Yates:

Larissa asked me to repost so I removed the last one. #90dayfiance

Larissa’s Instagram dramatics are just the latest in what has been an absolutely crazy week for the 90 Day Fiance Season 6 cast on social media! I had previously created a funny photo in which I suggested that perhaps Colt and Asuelu were the only ones who might rescue this cast from their dramatic downward spiral. But, given Larissa’s accusations against Colt, plus the photo of the broken glasses that he posted, I’m officially going to have to narrow the list of potential heroes to just one Samoan.

Here is the before photo and the altered one after catching up on all the Coltee and Larissa drama:

The fate of the entire #90DayFiance Social Mediaverse rests in the arms of two boys at heart. Will it be enough? Or is it already too late? . (I was hoping to work Ashley and/or Jay in, but I ran out of mutant drama villains!) ? 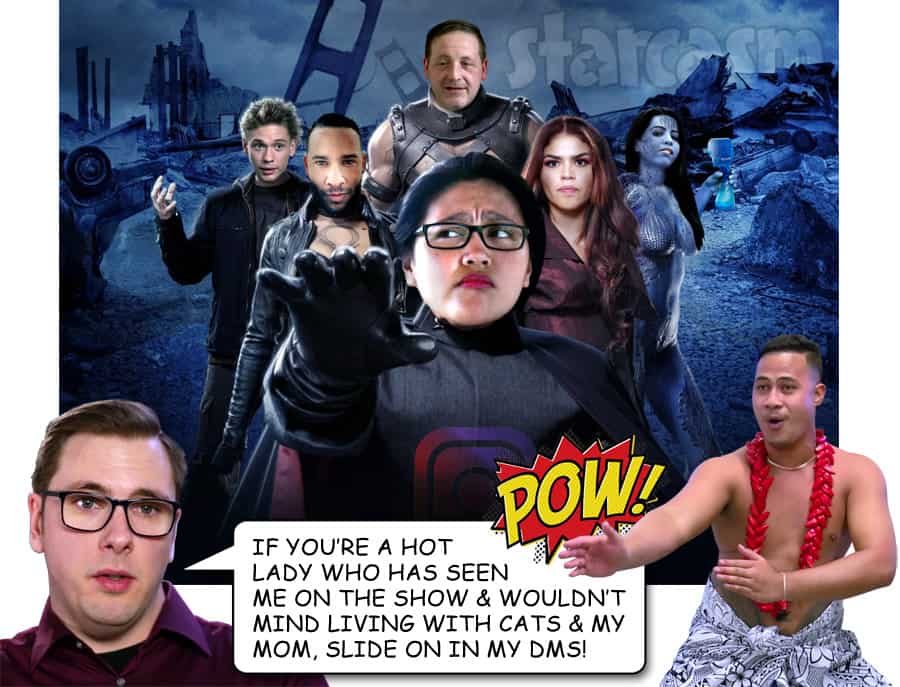 If you need a break from the crazy drama, be sure to tune in to a soothing and relatively drama-free (by comparison) episode of 90 Day Fiance Sunday night at 8/7c — followed by a special one-hour Live After Show!