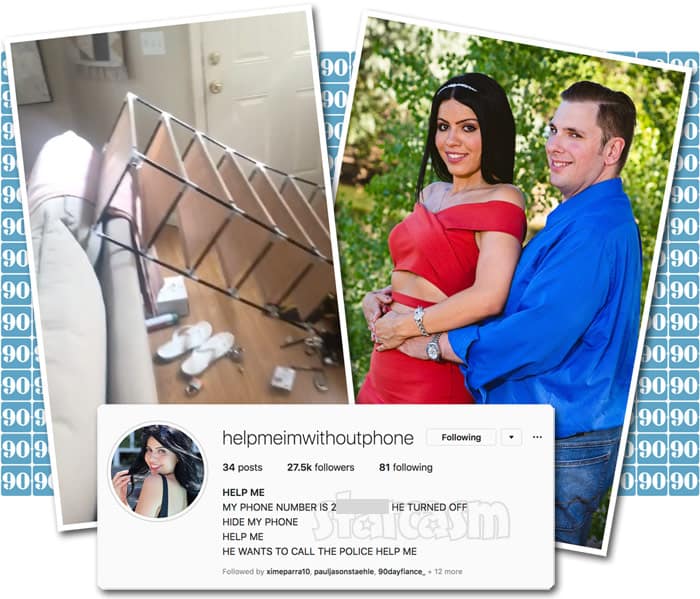 90 Day Fiance couple Larissa and Colt Johnson appear to have had a huge falling out, and Larissa documented a large part of it on Instagram in a series of videos and very concerning messages. Thanks to her public plea for help after Colt allegedly took her phone and she hid herself in the bathroom, multiple people called Las Vegas Police, who reportedly went to the couple’s house for a welfare check.

UPDATE – It has since been revealed that Larissa was arrested and charged with domestic battery. So it is VERY important to note that this post is merely a recap of what she posted. Colt has not posted about the altercation, so we do not have the full picture. That being said, it is important to document Larissa’s side based on her public posts throughout the day.

Here is a complete recap of everything that Larissa has shared so far, including the actual video clips from her Instagram stories:

Colt’s mother Debbie is currently in New York City to participate in Sunday night’s 90 Day Fiance Live After Show, so that means it was just Colt and Larissa. Larissa reportedly posted a video earlier today in which she was talking with Colt, who was sitting on the couch, insisting that he “treat” her while his mom was away because he had promised he would. That video was quickly deleted and appears to only exist in the memories of those who viewed it.

Colt later brought Larissa some flowers as she was cleaning the house. Larissa says that she told Colt: “I accept the flowers, but what you are doing is wrong. Stop the lies. Stop pretending to people that we are not together.” Colt then tossed the flowers on the floor and apparently turned over a small shelf with lots of shoes and a large number of padlocks that I assume are for his lock picking hobby.

So what is it that Colt was supposedly lying about? According to a numbered series of Instagram story videos, Larissa claims that Colt told her not to follow him or post anything about him on social media. The demands have been especially frustrating for Larissa because Colt has apparently been receiving messages from other women.

“I can’t lie. I can’t pretend anymore,” Larissa says. She adds that numerous women have been messaging Colt since the show started airing, and that he believes if Larissa shows that they are happy online, “the girls will stop.”

Larissa is obviously quite emotional about the whole situation. “It’s extremely selfish,” she says. “To be honest, I want to cry because I feel like sh*t…But this is the truth. I can’t keep lying, lying, lying, lying…because I’m tired. I’m tired of this game, you know?”

Despite her frustration, Larissa insists that she and Colt were not broken up at the time her Instagram story videos were recorded, and she reveals that she still cuts his fingernails and trims his nose hairs. “I still do things for him, but he doesn’t like to show us together.”

Larissa then goes from sad to angry as she shows footage of the inside of the house and reveals that Colt loved it “when people thought that he has money, nice car, and I was an ungrateful b*tch from Brazil.” She continues in the next clip: “So he decided to ‘pretend’ that we were not together. And I thought that he was OK with this. But, after I see that he was taking advantage of me…” [The video cuts off.]

This is when we see the bouquet of flowers on the floor and the overturned shelf: 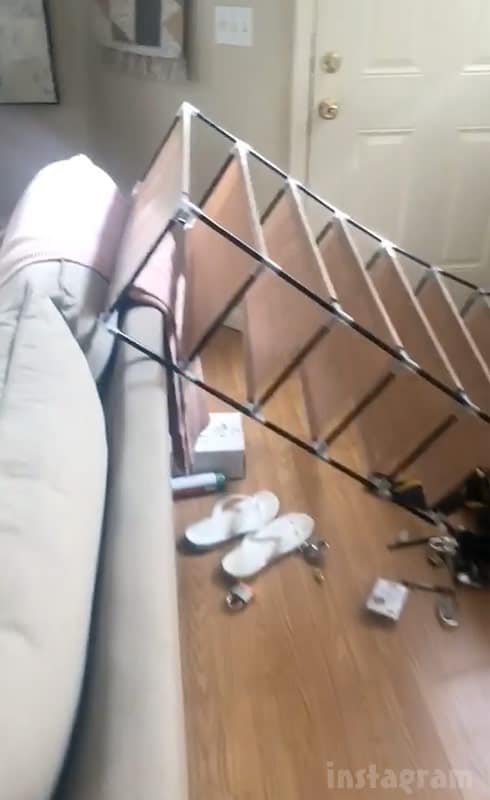 I assume that we are to believe that Colt turned the shelf over as he stormed out of the house, because he doesn’t appear to still be in the residence as Larissa is filming. But, he would later return — and that’s when things really seemed to go off the rails!

Here are the videos compiled into two parts by @90DayFiance_:

We don’t have videos from Larissa documenting what happened later, but that is allegedly because Colt took her phone — or at least he deactivated its internet capabilities. Larissa says she hid herself in the bathroom with her Macbook, and she changed her Instagram ID to @helpmeimwithoutphone with this as her bio: 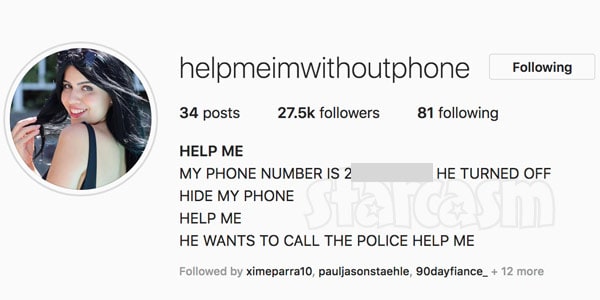 She also shared these concerning updates via comments on Instagram:

DESACTIVATED MY DATA AND WIFI HE IM HIDDEN AT BATHROOM

As you might imagine, these posts got a lot of people VERY concerned, with more than one person reportedly calling the Las Vegas Police Department about the situation.

According to numerous reports online, police were dispatched to Colt and Larissa’s home for a welfare check. Numerous social media accounts and media outlets reported that Colt had been arrested, but there was no confirmation of those reports.

UPDATE – When I searched for an arrest record for Colt I couldn’t find anything, so I did a search for Larissa as well. As stated at the top of this post, I discovered that she was arrested and charged with domestic battery!

Numerous sources on social media were reporting that Larissa had left the house and was staying with a friend that lived in the Las Vegas area. [With it being revealed that Larissa was arrested, I’m unsure how accurate those reports are. Of course, it could be that Larissa was able to post bail and then crash at her friend’s place.]

In addition to her followers on social media, Larissa’s TLC co-stars from 90 Day Fiance and Before the 90 Days were also rushing to her aide! Her Season 6 co-star Ashley Martson wrote: “Larissa when police come get in contact with me. I’ll fly you here for now if you unsafe.” (In case you missed it, Ashley just revealed this week that she was kidnapped, raped, and nearly killed when she was 19, so she is particularly sensitive to situations where it appears that a woman’s safety might be at risk.)

Before the 90 Days star Jesse Meester also used the Instagram comments section to express his concern and to tell Larissa “I can help get a hotel there or book a flight home!” He later shared this update:

My heart is crying for her and it’s such a horrible feeling to feel this helpless and be in a situation like this. I’m in close contact with her friend to see what we can do now as it didn’t end all to well. Situation is under control by police and more I can’t share in respect to their privacy but we will do whatever it takes.

We will continue to monitor this story and update when we know more. I assume that the topic will come up during the appearance of Colt’s mom Debbie on the 90 Day Fiance Live After Show Sunday night, but that is not necessarily a guarantee — especially if they are still filming for the current season with the altercation [and Larissa’s arrest] to be featured in a later episode.