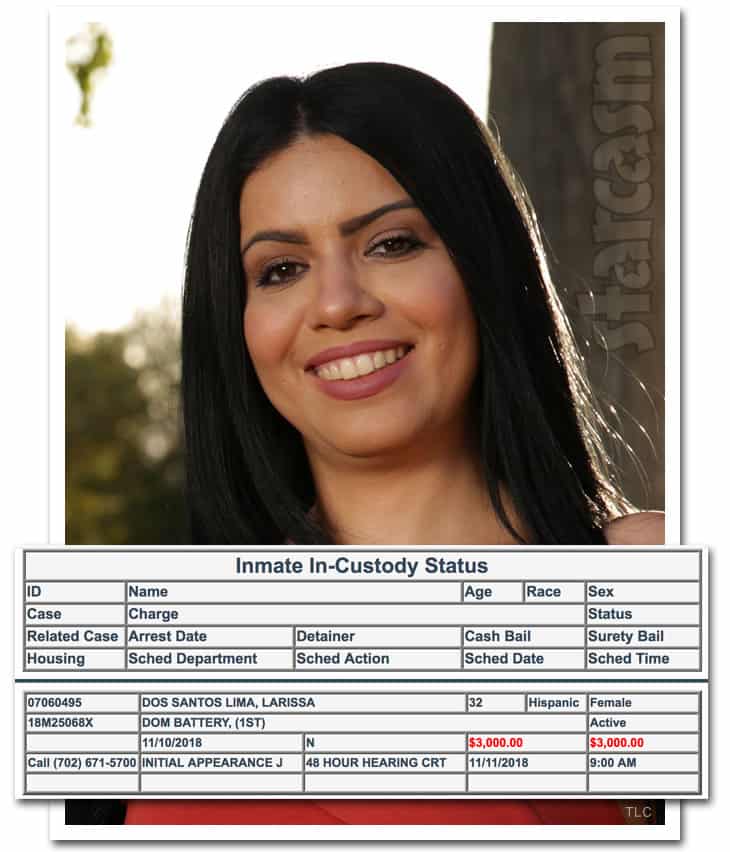 90 Day Fiance couple Larissa and Colt Johnson got into a huge fight at their home earlier today, with Larissa posting a series of videos on Instagram — including an overturned shelf. Larissa later changed her Instagram ID to @helpmeimwithoutphone and revealed in her bio that Colt had taken her phone and wanted to call the police. After initial reports circulated that Colt had been arrested, it was later revealed that it was Larissa who was booked and charged with domestic battery!

According to online jail records, Larissa was arrested and is currently behind bars at the Clark County Detention Center. She has bail set at $3,000 with a scheduled court date at 9AM Sunday morning — which seems odd.

We uncovered the information while putting together a timeline of Colt and Larissa’s dramatic fight, but Instagram user @90DayFianceFan was the first to share it publicly. (We had Larissa’s full name from her and Colt’s marriage certificate, and after we couldn’t find Colt listed as an inmate, we did a search for Larissa not really expecting to find anything.)

We don’t have any more information about what Larissa allegedly did that caused her to be arrested and not Colt — but we will certainly update as soon as we know more. Meanwhile, stay tuned for our altercation recap post that should be up soon. [AND HERE IT IS.]

UPDATE – Colt’s mother Debbie responded to concerned commenters (as well as those wanting to insist that Colt is the bad guy in all of this) on Instagram by revealing “everyone is fine” and adding that “everything is being done that can possibly be done at this time.” She asked that people try to be patient and allow them to handle things. “This is a very difficult situation, could everyone please back off. We would very much appreciate it. At least for a little bit. Please give us some space.”

UPDATE – Colt shared a brief account of his side of what happened in a series of text only Instagram story images. They were only up for a brief amount of time before being deleted. He did refer to Larissa as his wife at one point, so some are wondering if he was asked to take them down by TLC. Here are his posts:

UPDATE – This was not Larissa’s first arrest as she was previously booked for domestic battery back in June!

90 DAY FIANCE Colt and Larissa fight: a full recap and timeline of her posts and updates