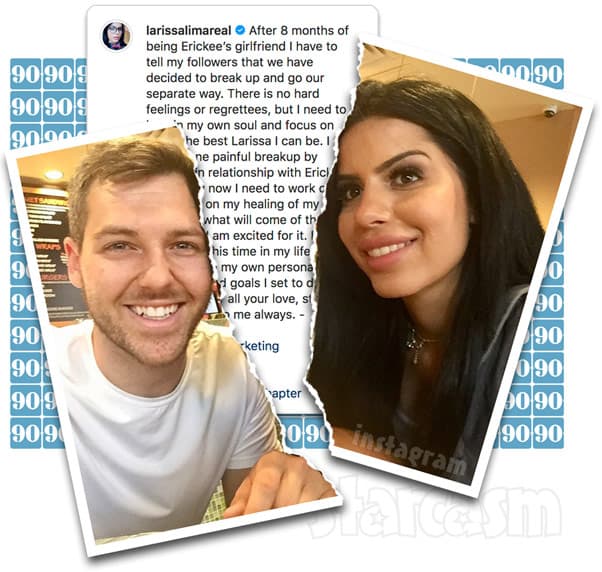 The Queen is single! 90 Day Fiance: Happily Ever After star Larissa dos Santos Lima just announced that she and her boyfriend Eric Nichols have called it quits!

“After 8 months of being Erickee’s girlfriend I have to tell my followers that we have decided to break up and go our separate way,” Larissa announced on Instagram moments ago. Larissa showed her sense of humor with additional references to her tendency to add “ee” to the end of her words as she continued.

“There is no hard feelings or regrettees, but I need to look in my own soul and focus on being the best Larissa I can be.”

The focus on herself comes after Larissa had very little time to herself between her previous relationship with ex-husband Colt Johnson and her new boo. “I try to heal one painful breakup by jumping in relationship with Erickee but I know now I need to work on me and focus on my healing of my scars,” Larissa said. “I not sure what will come of the future but I am excited for it. I look forward to this time in my life as a reflection on my own personal dreamees and goals I set to do.”

Larissa concluded by expressing her appreciation to those who have supported her over the past year and a half — a year and a half that has included three domestic violence arrests and a very acrimonious divorce. “Thank you for all your love, strength and support to me always. ??❤️ …Thank you guys.”

UPDATE – What’s a Larissa break up without at least a little drama, right? Eric apparentl found out about the break up the same way the rest of us did, and he was not too pleased about it. “Dumped by a girl on 9/11?” he asks in his Instagram bio. “Thru a post? My mother saw 2 call to tell me about? I WILL ALWAYS REMEMBER 2 BE ME & 2 rather die on my feet then live on my knees ??” (My apologies for how hard it is to read. I guess Eric had to truncate things to fit it into his bio.)

I sent him a text he never answered, so I decided to make it official online. I did not breakup because a post, but because a serie of events. We had a lot of fun together, but we are not on the same page of relationship. I was giving too much and not having enough effort back. Eric is a great person, loved him and I tried since the very first kiss until the very last rose.

I realized that I need to concentrate on me and love myself more before I can be with someone, he is a good guy and wish him the best!!

“Last post about my past relationship!” Larissa captioned a text graphic with the text above. “Eric and I wasn’t using each other, we were living a relationship and we had up and downs. I wish the best we just wasn’t at the same page about a future together and making plans together. ;)”

Larissa got some support from at least two other Happily Ever After alum in the comments section of her initial announcement. “Annie and I wish the best for you in all of your endeavors,” the always-positive David Toborowsky wrote.

Anfisa Nava also shared her support — and expressed her surprise. “Didn’t expect this but proud of you ??,” Anfisa wrote. “Everyone needs to find happiness within themselves without relying on others. If you ever need to talk I’m always here for you ❤️.”

In case you missed it, Larissa and Anfisa cemented their friendship back in July when Anfisa was in Las Vegas to kick ass at an NPC fitness competition. The two queens met for a meal and posed for numerous photos together: 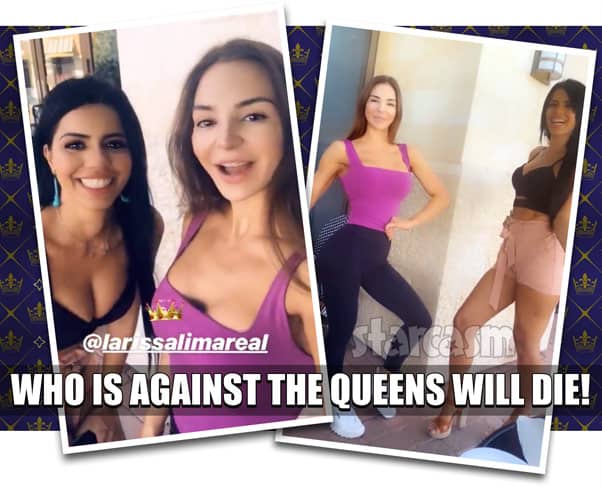 As far as Larissa’s break up, it sounds as though the split was much more amicable than her break up with Colt. Numerous fans questioned just how serious the relationship was, but I don’t think anyone could argue that Larissa’s time with Eric has been great for her! Regardless of whether or not you are Team Colt or Team Larissa, everyone would certainly agree their relationship was BAD NEWS and had a terrible effect on both of them.

Now, let’s see just how long Larissa is able to fend off all the single men in Vegas! How long do you think it will be before we have a new kingee?