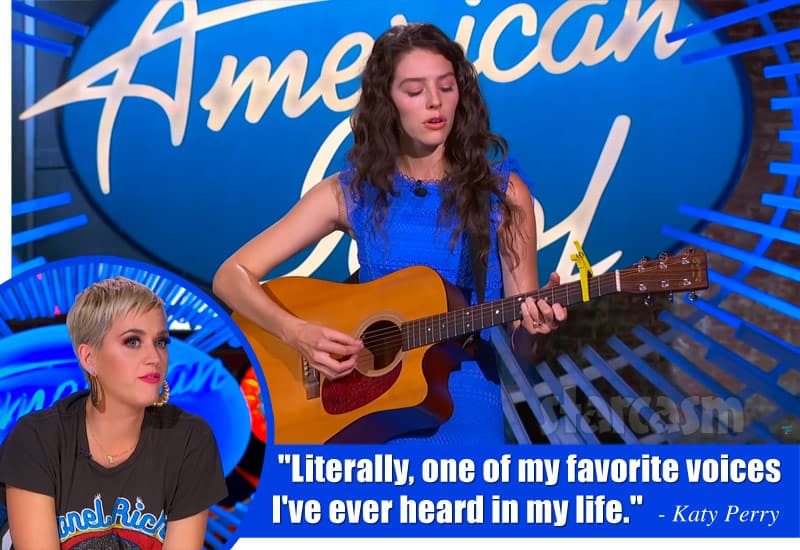 It’s finally here! More than six weeks after we first reported on former 90 Day Fiance star Evelyn Cormier’s successful run on American Idol, we now have her full audition clip — which BLEW AWAY all three judges!

I could try to describe her performance, but why should I? You can watch it for yourself! Plus, we have the judges’ reactions — and they are WAY more qualified than me.

“Literally, one of my favorite voices I’ve ever heard in my life,” Katy says before the final note from Evelyn’s guitar even fades out.

Evelyn seems genuinely humbled by Katy’s comment. “Oh my goodness,” she says as she blushes, smiles, and wipes her eye.

“I think when you have a really amazing band behind you, it’s going to be something CRAZY!” Luke adds.

“You have a sound,” Lionel says. “You have a sound that’s yours. I love the air. I don’t know what you’re doing, but whatever it is — it’s an identity, it’s, it’s an absolutely amazing identity.”

All three judges vote “yes” for Evelyn, and Katy warns Evelyn to “pick the right songs” before assuring her: “You are my favorite voice.”

A rather overcome Evelyn is then handed her Golden Ticket to Hollywood!

Evelyn took to Instagram after her segment aired and expressed her gratitude for the opportunity:

Let me just say…. CONGRATULATIONS Evelyn! It is truly a rare thing to garner that much praise from all three judges! I speculated that perhaps Katy Perry really identified with Evelyn given their very similar upbringing, but I really could not have predicted that she would blow Lionel and Luke away as well!

I know Evelyn has more than her fair share of detractors among the fans of 90 Day Fiance, but I’d like to think that even some of her detractors will join me on board the #TeamEvelyn train! She’s part of the 90 Day family y’all! If that was Tarik Myers (aka Dirty DayOh and Dirt Bourdain) up there blowing away the judges while rapping with a huge gold grill and sporting a mesh shirt, I’d be all about that too! And I will also say that I liked Evelyn’s version of “Wicked Game” more than anything else I’ve heard her do.

UPDATE – Katy and Evelyn chattin’ it up on Twitter:

? Love you!!! Thanks for the support and encouragement ???

90 Day Fiance’s Anfisa’s lips before and after injection