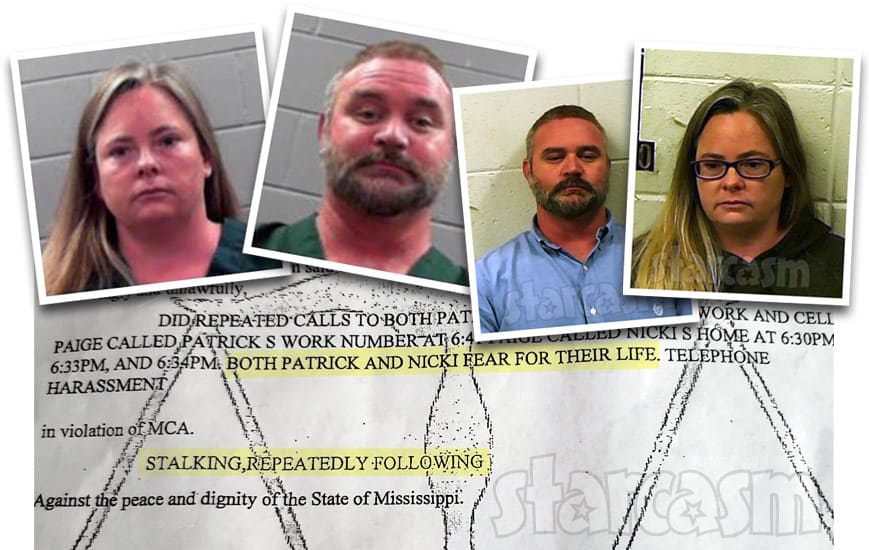 We now have some additional information, which appears to confirm that the stalking incident was in regards to Paige’s brother Patrick Marble and their mother.

The biggest update is that both Paige and Bernie have been released and are no longer in the custody of the Jasper County Sheriff’s Department. According to jail records, they were both released on Friday, not long after they were transferred in and booked.

Second, we have a purported affidavit by Patrick Marble and Nicki Smith accusing Bernie and Paige of repeatedly calling them at home and at work. According to the affidavit, which was signed on March 11, Bernie McGee “did repeated calls to both Patrick and Nicki’s home, work, and cell.” The document continues by stating that “Paige called Patrick’s work number at 6:41, Paige called Nicki’s home at 6:30PM, 6:33PM, and 6:34PM” on March 5. 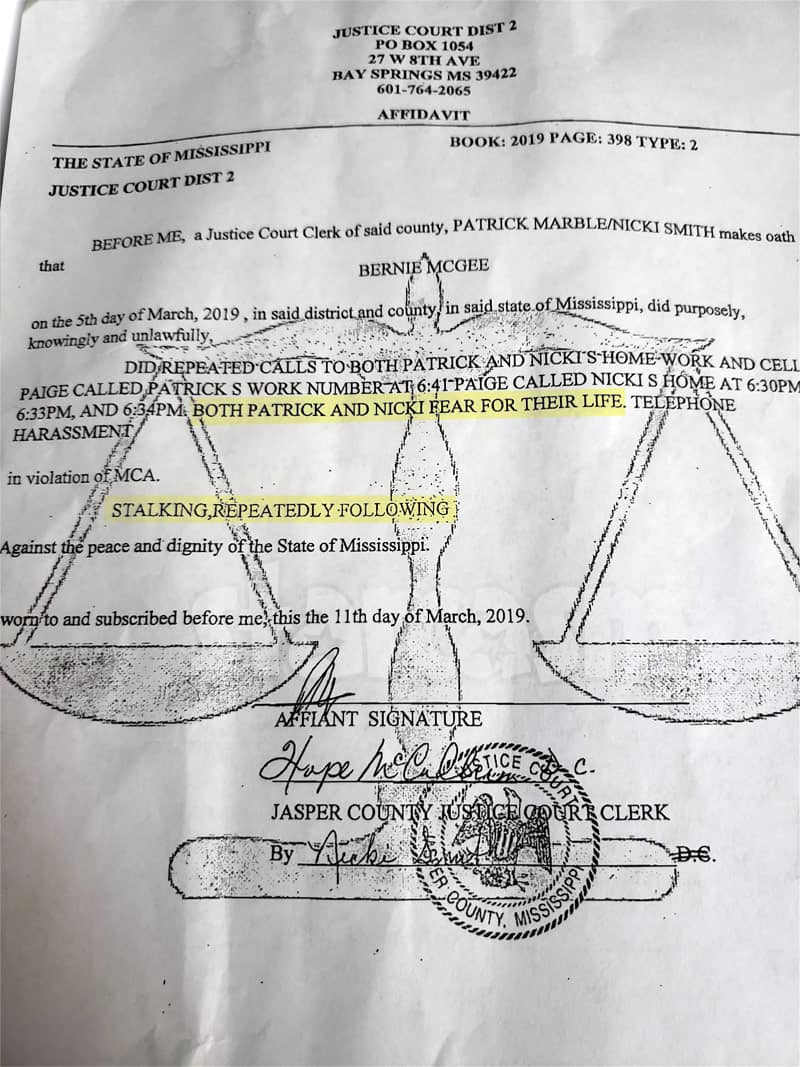 The document (above) indicates that, as a result of the alleged stalking, “both Patrick and Nicki fear for their life.”

The offense is listed as “Stalking, Repeatedly Following,” which is a “violation of MCA.” (From what I can tell, MCA stands for Mississippi Code Annotated. So, in other words, the actions by Bernie and Paige were in violation of Mississippi law. I say that because there has been some debate about whether or not “MCA” was an abbreviation for some sort of protection order in place between the McGee’s and the alleged victims.)

According to the Mississippi statutes, stalking is a misdemeanor charge. That can be bumped up to a felony charge of aggravated stalking if there was a weapon involved, a previous stalking conviction, or if the stalker is required to register as a sex offender as a result of the crime. I don’t believe either of those conditions apply here.

However, cyberstalking is an automatic felony. If there are any threatening emails or “electronic communications” (which I assume includes text messages and DMs) sent by Bernie and/or Paige, then that would qualify as cyberstalking. The affidavit above only mentions phone calls, but it sounds like there have been numerous angry exchanges made via social media, texts, and DMs.

UPDATE – Paige later clarified that she and Bernie were charged with “misdemeanor phone harassment under the stalking act.”

Here is a post from Patrick Marble in which he recaps the tensions between himself and his sister Paige, which was later shared by John Yates on Instagram:

We learned about the show in late December, 2018. In January, 2019, I began receiving a large number of messages from strangers informing me of Paige’s group and her posts.

Paige has a very long history of making false accusations against numerous family members, friends, neighbors, employers, etc. I was horrified by some of her accusations against me. Since she was a teen, Paige has had an insatiable desire to be seen as the victim. She has a violent temper and she’s repeatedly physically attacked my mother. Paige has even threatened to kill Mom when Mom refused to decide between me and Paige. She needs help. Paige has always been jealous and insecure. It’s been a lifelong nightmare.

That entry would certainly explain why Patrick and Nikki felt their lives might be in danger due to the alleged phone calls!

We will continue to look into this story — and the charges against the McGees — and will be sure to update when we know more, so stay tuned!