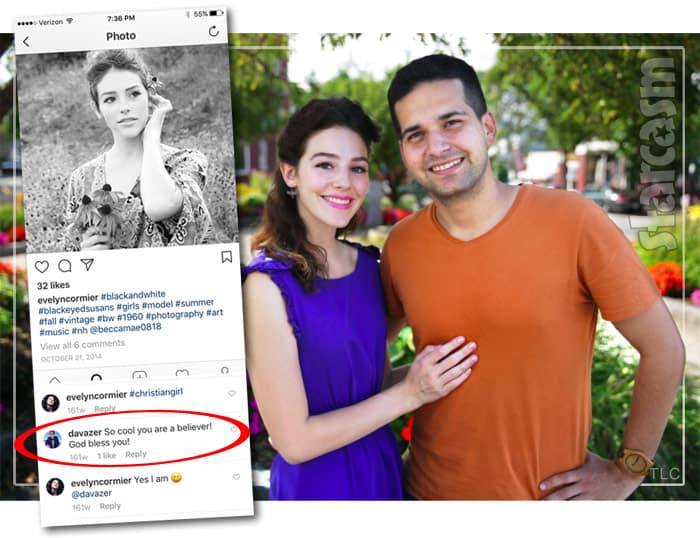 18-year-old 90 Day Fiance star Evelyn Cormier and her 27-year-old Spaniard fiance David Vazquez met via her Instagram page, as both have talked about may times. But what viewers may not know is that David was commenting on her page more than three years ago — when she would have been 15 or 16 and he would have been 24!

The timeline came to light on reddit where the “evuhdens” was first posted by a user in the 90 Day Fiance subreddit. That evidence is pretty indisputable as it shows David’s account interacting with Evelyn’s 161 weeks ago in the comments section of one of her modeling photos:

NOTE: I took the screen cap above just hours ago.

Clearly, commenting on Instagram is not sinful — and there is certainly nothing inappropriate in their brief interaction. But, a 24-year-old man commenting on a 15-year-old’s modeling photo might merit the raising of an eyebrow for some. (Actually, I was unable to verify Evelyn’s birthday so it is possible she was 16. She states in her TLC casting video that she is 18, and that was earlier this year, so she could have turned 19 since then. David states in the casting video that he is about to turn 27 in a couple weeks, so I do feel confident that he was 24 years old 161 weeks ago.)

David explained how he and Evelyn met in their TLC casting video: “I came across a video of her singing, and she was actually singing a worship song — a Christian song. So, as a Christian myself, that made it really interesting for me: a beautiful girl, that she is, with a beautiful voice and sharing my faith.”

David later sent a photo of himself and revealed to Evelyn that they had a mutual friend — someone that Evelyn worked with at a Christian camp in France. “I wouldn’t have been so comfortable talking to him if he hadn’t have been a Christian like me,” Evelyn told NewHampshire.com. “And because I had a friend that knew him and his family really well.”

In David’s defense, it appears that approaching beautiful teen musicians on Instagram can be a successful formula for happiness because he and Evelyn have ***SPOILER ALERT*** since gotten married, and they are all but guaranteed at least one more season of reality show stardom — if they are willing. (It has not been a great experience for Evelyn, who has emerged as this season’s most ire-inspiring cast member among fan groups and forums.)

You can continue to follow Evelyn and David’s road to the altar with new episodes of 90 Day Fiance airing Sunday nights at 8/7c on TLC.

90 DAY FIANCE Mohamed moving to Miami, Danielle didn’t cheat on him, and more