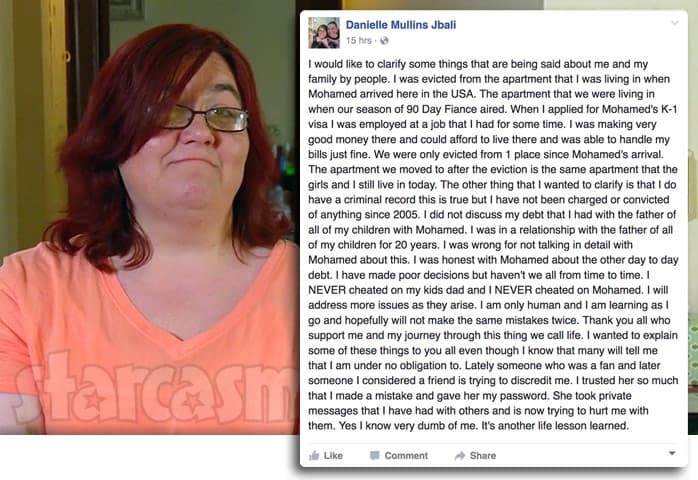 The highly unfortunate, but equally entertaining, misadventures of 90 Day Fiance couple Danielle and Mohamed continue to play out on TLC’s Happily Ever After? spin-off series as Danielle tries to put the pieces of her life back together after her Tunisian hubby Mohamed skipped out on her and her family in favor of the sunny skies and beaches of Miami, Florida — where he is shacking up with his blonde girl friend Luisa.

Last week we shared Mohamed’s reactions to how he has been portrayed on the new spin-off series, and this week we have Danielle’s response to the series as she clears up some questions and rumors surrounding her own infidelity, lying to Mohamed about her financial situation, her past eviction(s), and more.

Here is Danielle’s most recent Facebook post in its entirety, originally posted yesterday. (I should point out that Danielle has apparently gotten herself a social media speech writer because her Facebook posts are nothing like the hard-to-read hot mess-ages she use to share, which only seemed to make whatever situation she was trying to address even worse.)

I would like to clarify some things that are being said about me and my family by people. I was evicted from the apartment that I was living in when Mohamed arrived here in the USA. The apartment that we were living in when our season of 90 Day Fiance aired. When I applied for Mohamed’s K-1 visa I was employed at a job that I had for some time. I was making very good money there and could afford to live there and was able to handle my bills just fine. We were only evicted from 1 place since Mohamed’s arrival. The apartment we moved to after the eviction is the same apartment that the girls and I still live in today. The other thing that I wanted to clarify is that I do have a criminal record this is true but I have not been charged or convicted of anything since 2005. I did not discuss my debt that I had with the father of all of my children with Mohamed. I was in a relationship with the father of all of my children for 20 years. I was wrong for not talking in detail with Mohamed about this. I was honest with Mohamed about the other day to day debt. I have made poor decisions but haven’t we all from time to time. I NEVER cheated on my kids dad and I NEVER cheated on Mohamed. I will address more issues as they arise. I am only human and I am learning as I go and hopefully will not make the same mistakes twice. Thank you all who support me and my journey through this thing we call life. I wanted to explain some of these things to you all even though I know that many will tell me that I am under no obligation to. Lately someone who was a fan and later someone I considered a friend is trying to discredit me. I trusted her so much that I made a mistake and gave her my password. She took private messages that I have had with others and is now trying to hurt me with them. Yes I know very dumb of me. It’s another life lesson learned.

Prior to that update, Danielle shared numerous posts about remaining positive and making lemons (Mohameds) into lemonade, including a lengthy quote from “human potential thought leader” Bryant McGill:

Disappointment is coming, for sure! People are going to hurt you in ways you would never have believed even possible. You are going to be let-down and deeply betrayed. And there is only one thing to do when you are tragically let down — let-go. No matter how wrong they were, holding on will not make it right, it will only eat you alive over time. You are worthy of not reacting negatively to negativity. Don’t let them kill you twice. Letting go is the only way. Quit hanging on to the past; fantasizing, dreaming, wishing and replaying it. You can’t change it. You just haven’t realized it yet, but you have moved on. You are different now; not of the past, but of now — a different person. You don’t need whatever the past had — it’s gone. Your life is here today. Your greatest moments are ahead of you and are right where you are now, so seize them while you can, before it is too late. Quit the endless worrying about the future. The way you get through life is one day at a time; even one hour at a time or one moment at a time. Start by finding, creating or noticing one good moment. Even in the darkest of times, if you look, you will find one. Being more positive just takes practice. You can retrain your mind to see the best possibilities in everything. A good moment in a bad day counts. Begin with this moment, and make it count.

Don’t be afraid to get back up – to try again, to love again, to live again, and to dream again. Don’t let a hard lesson harden your heart. Life’s best lessons are often learned at the worst times and from the worst mistakes. There will be times when it seems like everything that could possibly go wrong is going wrong. And you might feel like you will be stuck in this rut forever, but you won’t. When you feel like quitting, remember that sometimes things have to go very wrong before they can be right. Sometimes you have to go through the worst, to arrive at your best. 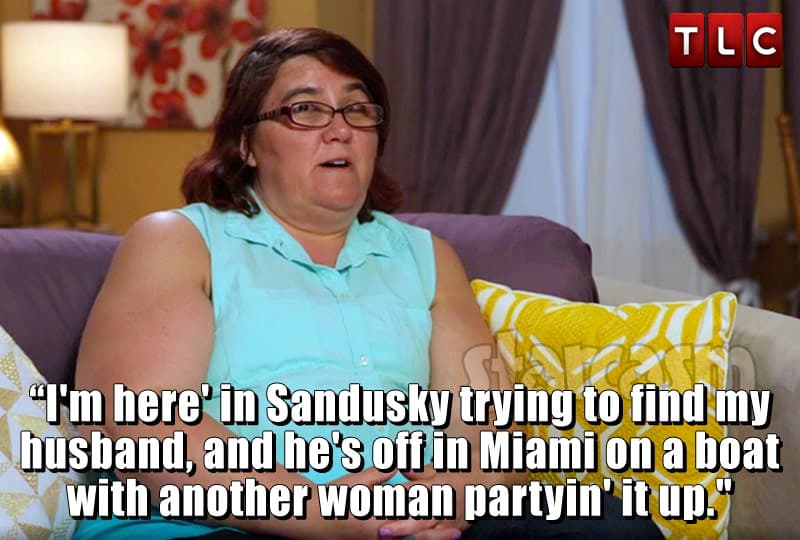 Meanwhile, Mohamed has apparently consulted yet another attorney (although certainly not as lawesome as his first legal counsel!!) and received some reassuring news, which I assume pertains to his immigration status:

I believe that there Justice in this country

After a long conversation with a very good lawyer, I am not worried about some stuff anymore

Mohamed also took another chance to criticize TLC and show producers for how they edited 90 Day Fiance: Happily Ever After? to make him look bad:

All you need these days is drama, sex, nudity or play with someone’s life with using slow brains people and there you go count your viewers

So sad and ridiculous

If Mohamed really did love Danielle and married her in earnest, then those 90 Day Fiance producers really are some sinister illusionists!

As a recap, Mohamed married Danielle despite exhibiting no outward signs of affection — either physical or vocal. Soon after receiving his green card (and after taking several trips to places like New York City and Las Vegas without Danielle), Mohamed left Danielle and his family to live with a blonde woman named Luisa in Miami. He currently has a job (driving for DHL I think?) and seems to be living the entry-level American Dream.

There sure seems to be a lot there that can’t be attributed to editing. And I have to side with the majority of outraged viewers in that it seems rather astonishing that Mohamed would be allowed to stay in the United States given all of the evidence captured and shown on national television. I suppose we will all have to stay tuned to TLC (and to Starcasm) to see how this plays out…