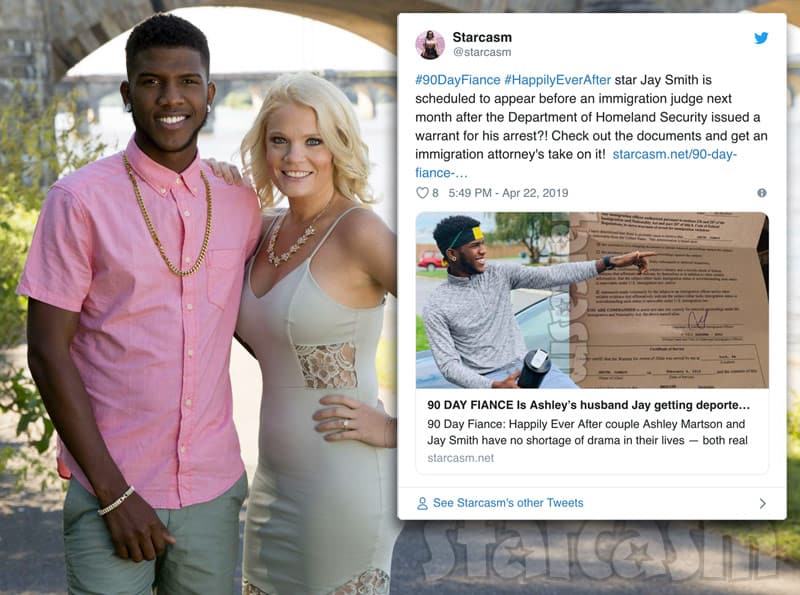 Documents surfaced online last month indicating that 90 Day Fiance: Happily Ever After star Jay Smith might be at risk of being deported. In addition to a warrant for his arrest issued in February, there was also a Notice to Appear requiring Jay to go before a U.S. immigration judge on May 8. But, instead of being in Philadelphia for his purported court date, Jay was with Ashley doing a wedding photo shoot in Maryland. (More on that in a minute.)

So what happened with Jay’s scheduled court date? Ashley did an impromptu fan Q&A on Instagram earlier today and a follower asked whether or not it was true that Jay missed his court date in order to do the photo shoot. “Nope,” Ashley replied, “it was handled out of court.”

I contacted the immigration court in Philadelphia where Jay was scheduled to appear, and the clerk informed me that there were no case records found for Conroy St. Christopher Smith, Jay’s actual name as it appears on the Notice to Appear.

The Notice explains that Jay was “admitted to the United States at Baltimore, MD on or about March 6, 2018 as nonimmigrant (K1) with authorization to remain in the United States until June 3, 2018.” However, it seems that Ashley didn’t file for Jay’s Adjustment of Status after they were married, and as a result, Jay “remained in the United States beyond June 3, 2018 without authorization from the Immigration and Naturalization Service or its successor the Department of Homeland security.” (Click here to see the warrant and Notice to Appear with a more complete explanation of Jay’s situation.)

At the time of our previous post it was unclear if the failure to apply for an Adjustment of Status was the reason. If that was the reason, it was unclear whether it was an oversight or intentional. However, on the most recent episode of Happily Ever After, it was revealed that Ashley was holding off on filing for Jay’s Adjustment of Status because they were having marital difficulties and she wasn’t sure if they were even going to remain together.

So what is Jay’s immigration status at this point? Ashley didn’t go into any detail about what she meant exactly by “handled out of court.” I do not know how particular US immigration is when it comes to missing deadlines with things like an Adjustment of Status. Perhaps they were simply able to submit the paperwork and clear things up — although it is unclear why Ashley would do that after recently filing for divorce for the second time this year.

As if the relationship status between the two reality stars isn’t confusing enough, both of their Instagram accounts have been jam packed with images and videos from their wedding photo shoot in Maryland on Wednesday. Here are a couple galleries:

Thank you so much @kiamariestone for selecting us as models for the @nikonusa shoot. This shoot has been in the making for 9 months and they did an amazing job! I cannot wait to see the photos. Here are some behind the scenes photos. Yes, we may not be together, but if I agree to do something I’m gonna do it! #photography #nikon #weddingshoot #90dayfiance #tlc #beautiful flowers by @fayeandrenee 📸: @kiamariestone venue: @rosewood_farms makeup: @daniellesbeautystudio

So why in the world would these two be posing for wedding photos? Ashley explains that they agreed to do the shoot nine months ago. “Yes, we may not be together, but if I agree to do something I’m gonna do it!” she added. (I should point out that she did make some posts a couple weeks ago about looking for a male model to participate in a wedding photo shoot with her. I guess she either couldn’t find one on such short notice, or else opted to go with Jay for some other reason.)

Among all the photos and clips from the shoot uploaded by Jay was one quick shot of his fashionable accessories, which conveniently seems to show a US social security card peeking out of a wallet: 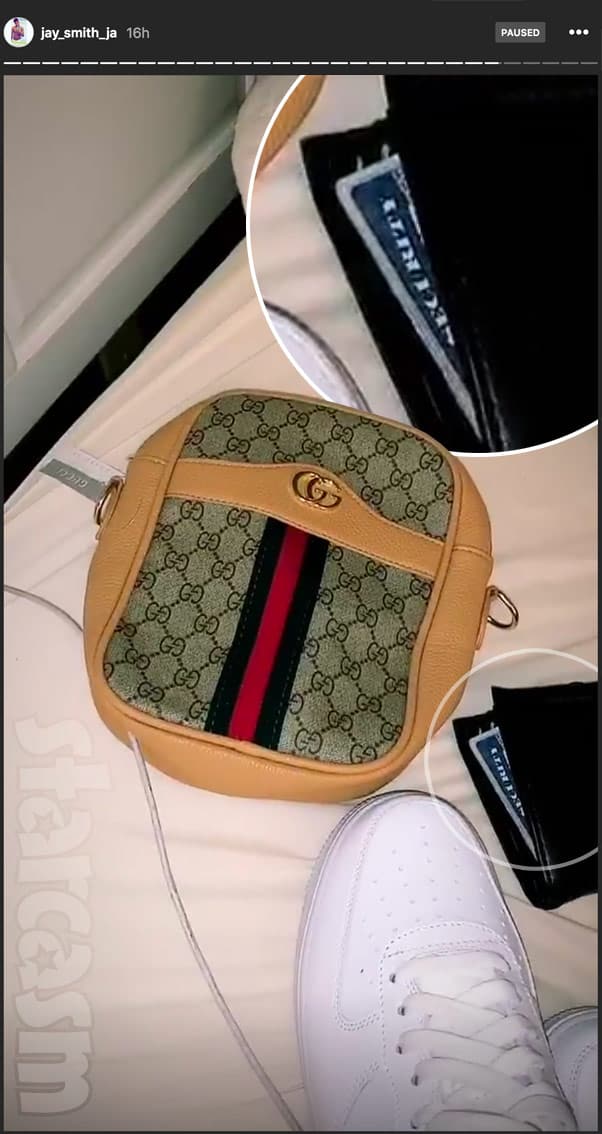 I did a little research, and immigrants entering the United States on a k-1 visa are eligible to apply for and receive a US social security number and card prior to filing for an Adjustment of Status. So, it would make sense that Jay has one given that he could have been able to do that regardless of whether or not Ashley completed the AoS that she was apparently hanging over his head.

To keep up with Jay and Ashley’s ridiculous relationship antics, be sure to tune in to new episodes of 90 Day Fiance: Happily Ever After airing Sunday nights at 8/7c on TLC.