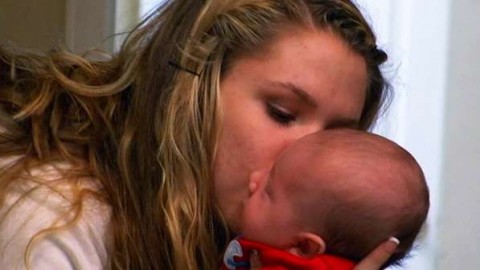 When we meet Kailyn Lowry, an 18-year-old from Easton, Pennsylvania, she’s in a predicament much bigger than just being pregnant. She’s never met her father, but is interested in finding him after his sister finds her on Facebook, her mom is living in a hotel with her boyfriend, and Kail is living with her boyfriend Jonathan Rivera. They feel cramped in his room, but Jonathan’s parents Janet and Eddie give Kail the support she’s missing from her own parents.

Kail has been dating Jon for nine months and used to talk freely with him about anything, but they barely talk since the pregnancy. As she eats dinner with Jonathan and his family they discuss what happened when Kail first found out she was pregnant. She says her mom pushed for her to get an abortion.

She dispense an ominous piece of wisdom on the room: “Things will get worse before they get better.”

Kail’s embarrassed about revealing her pregnancy to kids at school who aren’t her close friends, so she goes shopping for baggy clothes with Jonathan (who’s nickname is “Jo”). She studies for the SATs, but her thoughts are with her estranged dad, who hasn’t seen her in 16 years. His sister found Kail on Facebook, and has expressed that he’s interested in seeing her. Kail’s pregnancy and almost non-existent relationship with her mother makes her want to take advantage of this opportunity.

The next day at the SAT test Kail is nervous that people will notice that she’s pregnant. At her friend Steph’s house, Kail’s friends tell her that everyone noticed her belly despite her efforts to hide it.

Back at Jo’s house Jo’s mom Janet has a touching moment with Kailyn when she breaks down about her experience with high school kids. Janet tells her something that she’s probably never heard from her own mother: “You’re special, you’re smart, you’re beautiful, and you’re pregnant, and you’re going to do it and you’ll be fine.”

Hanging out with friends, again Kail admits that, like Leah, she got pregnant on prom night, and didn’t use protection.

Now enters Kail’s mom, Suzi, who’s living in a hotel room with her boyfriend. Kail feels like her mom often chooses her boyfriend over her. As they drive to pick out furniture that Janet and Eddie will pay for, Suzi gets a call from her boyfriend. They return home to discuss prices, and Janet tells Suzi that Kail misses her, to which Suzi replies “Absence makes the heart grow fonder, so let me leave.” Ouch. With a mother like that, who needs b*tchy girls at school?

Kail’s dad invites her to Thanksgiving at his home in Dallas, TX, and Kail is nervous/excited to go. Meanwhile, Jonathan’s parents confront him about his distant and negative attitude towards Kailyn and the baby.

November comes and they go for a sonogram, and Jo acts really uncomfortable as everyone says the baby looks like him. He meets up with his friends and his brother where he reveals that he doesn’t know what he thinks about the pregnancy yet, and he’s still just trying to figure things out.

When Kail tells her mom about visiting her father, Suzi tells her to not expect anything from him and instructs her to not “come crying” to her when everything falls apart. Kail tells her that she understands that her dad can’t give her much, so she doesn’t expect much.

Jo gets in a huge fight with Kail, and he leaves. He doesn’t return the next morning, which is the day Janet and Eddie take a nervous Kail to the airport to fly to see her dad.

It’s kind of a shock for Kail when she finally meets her dad, and her first impression is that he’s short. He’s a straggly lookin’ guy with long blond hair, a baseball cap, and a handle bar mustache. The culture clash continues as he takes her home and shows her his locked meat fridge, which contains a valuable $200 worth of meat.  They sit down for a conversation about roadkill and Kail slips in a question about whether he’ll be present at the birth of her baby. Just like her mother, her father disappoints her with denying her and evading her question: “The only drawback about that is you never know when it’s gonna happen.”

That night she calls Janet asking to come home saying, “It’s safe to say I didn’t find what I was looking for.”

I Still Haven’t Found What I’m…

When she comes back she says the time apart has helped her relationship with Jo. He was going to go with her on a tour of a Community College, but something came up, so she calls her mom Suzi, who of course, can’t make it. Kail’s tears of abandonment are heartbreaking as she hangs up the phone and cries “I don’t even know what questions to ask.” This really isn’t about Suzi not making it for this one thing, it’s about all the millions of times Suzi wasn’t there for her daughter.

When she goes into the college, she gets an unexpected surprise: another teen mom who is estranged from her own parents and is fighting to survive for her baby. This other teen mom is optimistic and speaks about the strength that emerges to make a mother do whatever she can to take care of and protect her baby. Not every mom gets this type of strength as evidenced in Suzi, but it’s obvious that Kail, who’s been a fighter her whole life, will also fight for her child.

She says: “We have something in us as mothers that keeps us going.”

Kail needed that extra burst of support because that night her water broke, and her son Isaac Eliot was born January 18, 2010. She and Jo didn’t want to know the sex of the baby until birth, and she tried to keep the public from knowing it until tonight’s episode.

After the birth Kail feels normal, mixed emotions about the situation, and the show documents her struggling with Jo to adjust to life with a crying baby that needs attention 24/7. Kail has to stop the pattern of neglect her parents demonstrated with her, but thankfully she has Janet and Eddie as examples of caring, concerned, and involved parents.

A fight erupts when Jo feeds the baby at 3:00 a.m., but leaves the formula out. The screaming wakes Janet up and she comes in to mediate between two exhausted teen parents who’re still trying to cope.

A month later Kailyn takes Isaac to see his grandma Suzi, and points out that he won’t remember her because she never sees him. Suzi gets defensive and makes excuses. In voice-over Kail admits that “things with my mom are never going to change. It’s up to me.” Since then Kail and her mom have been estranged.

In the followup video interview Kailyn tells the camera how grateful she is for Janet and Eddie, and says of Janet “I couldn’t ask for a better mom.”

She closes with: “I’ve had to fight my whole life, so I’m just waiting for things to get better.”

The road ahead is tough, but Kail seems to have what it takes to build a better life from herself and her son, with the help of Jo, and especially, his parents.