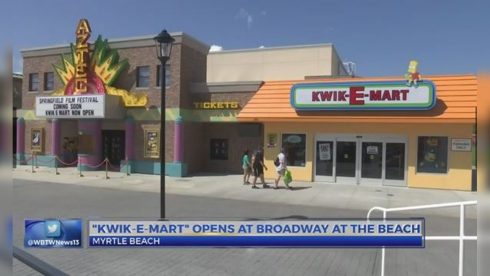 The first ever real life (outside of Universal Studios) Kwik-E-Mart from The Simpsons opened in Myrtle Beach, SC this weekend and it is perfect! The entire store looks pulled straight from the animation into the real world. Of course you can get Squishees, Lard Lad Donuts, Buzz Cola, Duff non-alcoholic energy drinks, and other iconic items from the show. To top off the excitement, a real life Aztec movie theater from the show will be opening soon, and it’s outside already looks amazing.

'The Simpsons' Kwik-E-Mart ready to open at Broadway at the Beach in Myrtle Beach » https://t.co/sYr5ddEnhL pic.twitter.com/AbhysuA75b

YouTube channel Mr. Myrtle uploaded a long video highlighting all the amazing Simpsons products and decor. The details are all insanely accurate. It looks like it’s just like stepping directly into the show and tasting the Squishies and Heat Lamp Dogs for yourself. ??

The Lard Lad donuts are HUGE! ?

Lady at the counter refused to admit they were made of tofu, but I know the truth. pic.twitter.com/5fdY4eGI2O

VIDEO Connecticut man fakes death to get out of engagement