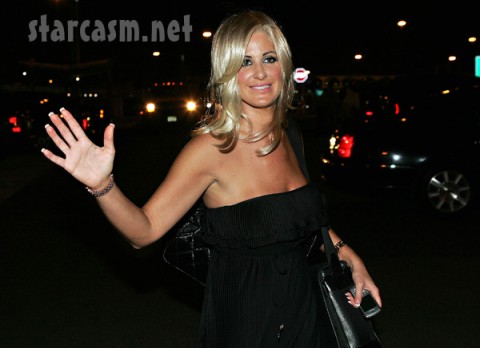 Kim Zolciak was married to a man named Daniel Toce for more than three years, from September 2001 to February 2003. You can check out the divorce documents here.

There have a been a minefield of rumors and speculation about Kim’s ex husband. Many people believe she is getting huge child support and alimony checks from him ($30,000 a month in child support and $250,000, but it turns out this isn’t the case.

At first there was massive confusion of Daniel Toce, Jr. with his father, who is 70 years old. Everyone latched on to this story because it fit neatly with Kim’s flashy gold-diggeresque image. In the pulp novel we are all constructing in our heads, this made perfect sense.

But Daniel Toce, who is daughter Ariana’s father, didn’t subsidize Kim Zolciak’s lifestyle. A source close to him tells us that he’s struggled with drugs, another says he was married with kids when he met Kim. Where is he now? He’s currently in prison for molesting a 15-year-old old!

Kim was only married to Daniel for 90 days. They had just moved to Atlanta, GA because Daniel had gotten a job there, Kim was pregnant with Ariana, they had two nice cars and a house, so they got married on the beach in Destin, FL. She divorced him after three months because she said he was cheated on her.

What is true is that Zolciak does have major coin (she seems to be the only Atlanta “housewife” not scraping by with the skin of their Bravo paycheck, reportedly $100,000 for each girl in Season 2), and she’s repeatedly said on television it all came from Big Poppa, who has been identified as Lee Najjar, an Atlanta real estate mogul. Kim met Najar soon after her divorce from Toce, and no longer had to worry about money.

TMZ was the first to publish pics of Kim and Lee together. Big Poppa’s children were also featured on MTV’s Cribs show just a few months ago. There are glimpses of both him and his legal wife, also named Kim, on the show. Big Poppa likes to keep himself and his mistresses in the spotlight, apparently.

Kim is now married to Kroy Biermann, (who she had a baby with,) had a hit iTunes dance single, and is continuing to rock being a Real Housewife of Atlanta minus any assistance from Big Poppa. She’s even got her own spin-off show on Bravo.

(For those of you coming to this page searching for Kim Zolciak’s age, as of November 2011, she’s 33 years old. She was born Kimberleigh Marie Zolciak on May 19, 1978, and was 29 years old when she first started taping The Real Housewives of Atlanta in 2007.)

Tara Reid calls off her wedding to Michael Axtmann