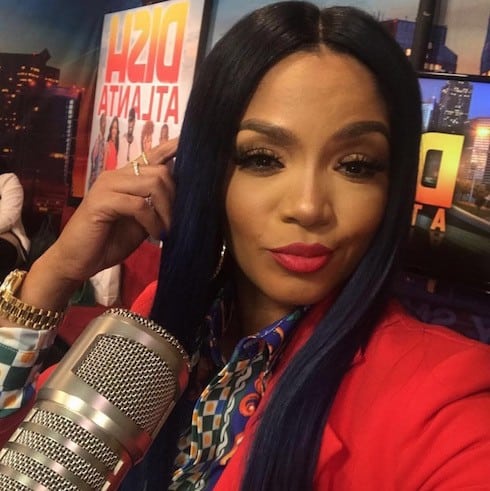 When last we heard from Love & Hip Hop Atlanta‘s Kirk Frost, he was settling out of court with alleged baby mama Jasmine Washington, and the results of his paternity test remained a mystery. Because both Kirk and Jasmine failed to show for a scheduled August paternity hearing, their case was dismissed–and it was widely believed that the pair’s absence meant Kirk had reached for a settlement, instead of prolonging his fight.

Now, Kirk’s long-suffering wife is making the publicity rounds, and she’s perfectly willing to admit that Rasheeda and Kirk Frost split. (Devotées will recall that Rasheeda first addressed pair’s split in May, meaning they’ve been apart for at least four months now.) Rasheeda just sat for an interview with Dish Nation in which she appeared, as VH1 put it, to “unknowingly [spill] her own tea” about the state of her marriage. She never drops the D-word, but Rasheeda definitely acknowledges that she and Kirk are not together:

To be fair to Rasheeda, though, it doesn’t sound like she let that little bit slip without knowing exactly what she was doing. After all–as we pointed out–she first mentioned the Rasheeda and Kirk Frost split this past spring, so the only news is that they’re *still* split, not that they separated in the first place.

She didn’t exactly confirm that Kirk finally took the DNA test, though, saying only “Hmpf” when asked. It seems likely that the LHHATL producers have that particular bit of tea on lockdown for Season 7, which recently began filming.

Finally, because it’s a long break between seasons and there’s a whole lot of gossip about Kirk out there, we’ll remind you that Kirk also allegedly has a second baby mama to deal with. The woman in question was reportedly pregnant with Kirk’s baby early last year, then had an abortion at his request and kept quiet about it when Kirk made several car payments for her.