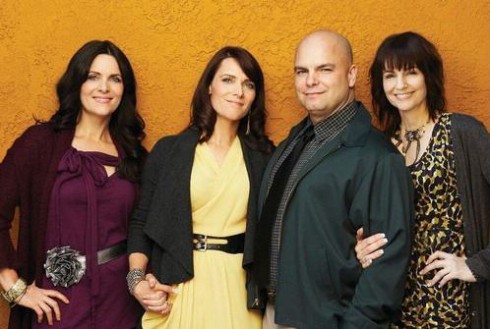 After the Brown family of TLC’s Sister Wives found fame by exposing their taboo lifestyle on television, it opened up a possibility in the minds of Americans that polygamist families can be very modern and happy. Last year year the Darger family came out too, giving television interviews, and publishing a book about their family called Love Times Three.

The Dargers are definitely unique. For one, the wives are pretty glamorous for polygamists. They are very fit (they work out as a family,) and seem to care about things like hair, makeup and clothes; but that wasn’t always the case (more on that below.) Another strange thing about about the Dargers? Two of the wives are twins, and Joe Darger married one of the twins ten years after he married his first two wives. His first wife was Alina, second was Vicky, who he married at the same time as Alina 22 years ago. Ten years later, he married Vicky’s twin sister Valerie.

They say they are of an independent polygamist faith, and from their clothing and hair in the old photos it looks at one time they may have been a part of a separatist Warren Jeffs’-type polygamist community. Vicky’s sister Valerie even speaks of leaving a “dysfunctional” polygamist marriage in order to save her children. The Brown family also likes to make a distinction between their family’s faith and the Warren Jeffs community, or any polygamists that abuse women, marry children, and or abuse the welfare system.

On tonight’s episode of Sister Wives, the Dargers vacation with the Browns, and Alina describes how she and Vicky wooed Joe at the same time:

“Before we were courting, Vicki and I both liked Joe, and we were just kinda hanging around, and in my view, I’m like ‘May the best woman win.'”

“Eventually Joe’s mom took them aside and asked them why they didn’t just pursue him together. Plural marriage is actually very natural to us. We were raised in it, it’s our belief system, it has a lot to do with our. So the idea of having sister wives was not very foreign to me. So when the opportunity came about for Alina and I to do this together, I knew it was gonna be a challenge, it was gonna be work, and it was even different from the norm among the weird polygamists.”

Joe was excited about having two girls pursue him at the same time, but was also a little scared “They became best of friends. Secretly I’d get a little exicted. I’d pull up and see that both of their cars were there . . . [But] I didn’t know if I was up to the task.”

Alina’s dad was a polygamist, but he wasn’t down with a man dating and marrying his daughter at the same time he was courting another girl. However, the three of them were so into the relationship that they wouldn’t stay away from each other so Alina’s dad eventually gave them permission to also marry Valerie, and Joe proposed to both of them immediately.

“We were happily married for 10 years. We certainly had some ups, and downs, and challenges, but after 10 years, Val, was my sister-in-law, I didn’t see her much, I didn’t look at her at all as a possibility for a wife, she showed up in my life and I saw somebody that I never saw before.”

Vicky’s sister Valerie was in another, “dysfunctional” plural marriage for over 11 years. Once she decided to leave for herself and her children, she went to stay with her sister Vicky. When Joe walked into the room, there was an electricity that Vicky saw between them, and she knew thew were going to get married.

One the show tonight the two families kind of bristle at the different lifestyles they have. The Dargers seem very organized and scheduled, while the Browns aren’t as into planning. In the Brown family, each wife’s voice is heard, and they’re all very different, so there can be major conflicts; but with the Dargers, Joe is the clear leader, and it doesn’t seem to be important to the wives to exert their individual personalities as much.

The Dargers also find it more easy to share a kitchen and a single house, something that’s a sore spot for Meri and Janelle. In fact, Kody says on the show that things happened over sharing a kitchen that they may never emotionally recover from. Janelle talked a bit about this in the Brown’s book, which came out this year. She actually moved away from the family for a while in order to get some space.

SISTER WIVES How much of Coyote Pass does each wife own? How much do they owe?