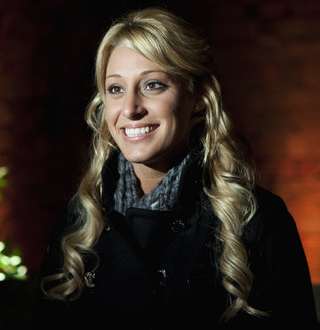 Vienna Girardi‘s showdown tonight with her former fiance Jake Pavelka on The Bachelorette was a blow-out! It was a fast-paced quip fest that full of spite-filled zingers and petty digs about GPS devices and measuring furniture (the cheating and not having sex took a backseat to the details). In fact, it was so much like a real life fight between a couple that was sick of each other, it was almost convincing that they had a real relationship.

In between all the napalm bombs Vienna spoke about her new job! She’s now working in marketing for Biolustre, which manufactures a hair reconstructive product. Vienna reportedly started her new job today, and her manager Leonard Buchanan told Radar Online that her work will involve setting up free hair treatments for cancer patients.

Jake quickly pointed out that the job was in Los Angeles, igniting up the old argument between themselves over who was the biggest fame-wh0re.