Tuesday, July 5 is the premiere of Teen Mom Season 3 featuring the original female fab four of Farrah Abraham, Amber Portwood, Maci Bookout and Catelynn Lowell. For those fans chomping at the bit for their Teen Mom fix we thought we would offer a little preview of what to expect this season in the form of a collection of links to all our stories from the last few months that will more than likely be featured on the show this season! Unfortunately these drama mamas managed to generate a lot of headlines so as a result we’ve been forced to break the post into two halves, starting (alphabetically by last name) with Farrah Abraham and Maci Bookout.

UPDATE – Catelynn Lowell and Amber Portwood’s previews are done. CLICK HERE to check them out!

Farrah made some huge life decisions over the last six months but before we get into boob jobs, court battles and moving out of state, let’s begin with something a little less dramatic – posing for a motorcycle calendar! 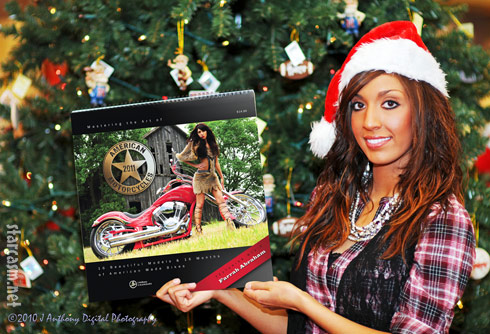 As part of her bid to start once again pursuing a modeling career Farrah posed for the “Mastering the Art of American Motorcycles” calendar wearing a Little Red Riding Hood inspired outfit that she helped design. (I think you can still order one through Amazon, though I imagine quantities are dwindling fast!)

Farrah actually posed for the calendar while MTV was filming for Season 2, but since revisiting her dream of becoming a model will more than likely be part of her breast augmentation storyline I wouldn’t be surprised to see some of their footage from the shoot appear this season. (According to photographer Jaye Ott, who we interviewed for the article, the MTV camera crews were there filming.)

Derek Underwood, the father of Farrah’s daughter Sophia, died in a tragic car crash in 2008 – something Farrah didn’t really address on the show until last season. During Season 2 she had a paternity test done with the help of Derek’s sister Kassy, who agreed to submit a sample of her DNA for the test. The test came back with a 99% certainty level that Derek is Sophia’s father – something that was supposed to all but guarantee Farrah would be able to receive Social Security benefits. But, as you may have guessed if you’ve seen Farrah’s trailer for Season 3, that apparently wasn’t necessarily the case. 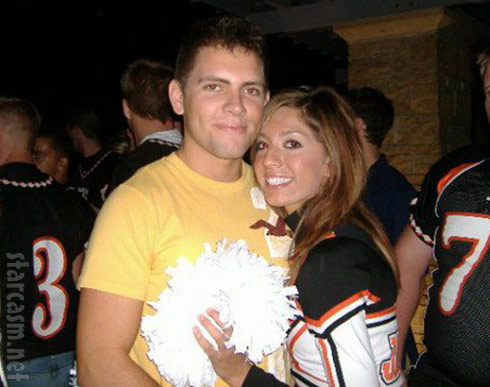 Sophia’s relationship to Derek will probably play another major role this season as Derek’s mother (Sophia’s grandmother) Stormie Clark sued Farrah in an attempt to get visitation rights with Sophia. Farrah would eventually win, but only after a long and drawn out (and much-publicized) court battle. It’s possible MTV could leave all of this on the cutting room floor because of Stormie’s unwillingness to be filmed and possibly Farrah not wanting it to be included, but it’s such an important event in Farrah and Sophia’s life that I can’t imagine it will be completely skipped over. (CLICK HERE for a rare photograph of Stormie Clark and Sophia together after Stormie happened to bump into her while she was with a babysitter and playing in a park.)

And speaking of babysitter, Farrah was accused by caregiver Britteny Scheer (who watched Sophia numerous times over a nine-month period) of neglecting Sophia in an interview with OK! magazine. (After clicking the link scroll down to the third paragraph) It was later cleared up and appeared as though things had been exaggerated and taken out of context by the tabloid – imagine that – but it may still may play a part this season. 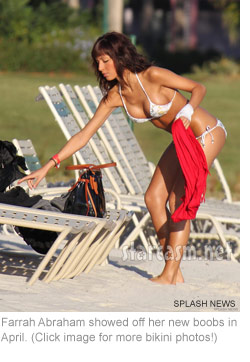 Farrah got a boob job. This one is DEFINITELY going to be a big part of this season, possibly even in the first episode. Farrah has confirmed that she had the procedure and that her decision and effects of the surgery would be featured on the show in two separate interviews – one for MTV Act and another for Us magazine. Rumors started online about Farrah having breast augmentation surgery after THESE PHOTOS of her looking slightly more endowed while wearing a tiny white bikini in Florida surfaced online.

And speaking of Florida, this season will feature Farrah’s decision to pack up her bags and, along with daughter Sophia, move to The Sunshine State to attend culinary school! It’s my theory that her actual move will be part of the season finale, but if not then we may see some of her Florida adventures since relocating – including shark fishing! Even if we don’t see anything from after her move, she still spent a lot of time in Florida while trying to make up her mind, including her bikini-clad beach trip as well as a trip to Disney World with Sophia. 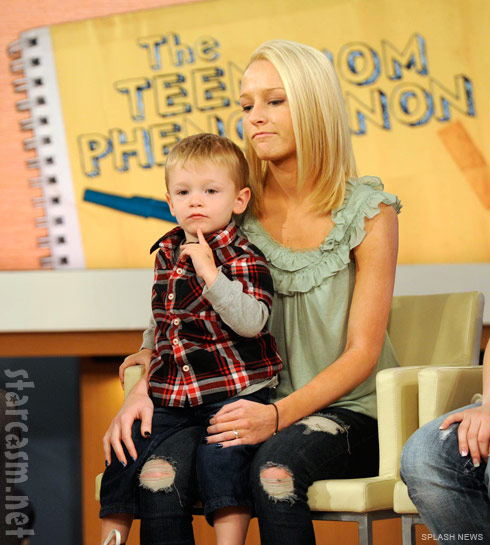 The big question for Maci this season is “Does Kyle propose or doesn’t he?” A friend of Maci’s told OK! back in April that Kyle had popped the question, but Maci later denied those reports on Twitter. My guess is that Kyle does propose and we will see him down on one knee for the season finale, but that is completely and entirely unfounded speculation on my part!

In her interview clip with Us magazine Maci reveals that her relationship with baby daddy Ryan Edwards is better most of the time saying, “We’ll be great for seven days and be able to get along and then there’ll be that one day that’s just, like a nightmare.” Judging from the Teen Mom 3 preview clip her decision to move in with Kyle and Ryan’s objections will be a big part of her story line.

Soon after the news broke that Farrah Abraham had gotten a boob job, In Touch claimed Maci did the same. (Scroll down to the bottom after the link) Although she has never confirmed she had breast augmentation surgery, she did share a photo on Twitter that sure seem to back up that theory! And just in case you’re theorizing Maci was just having some fun with a large bra and some stuffing, there is THIS PHOTO of her and fellow Teen Mom cast member Gary Shirley partying it up in Nashville in which it appears as though Maci’s bookends have indeed been enhanced, but then again I suppose it could just be a downright magical Wonder bra or something. (See: Paris Hilton) I really thought she had opted to have the surgery, but it sure seems weird that Farrah would be talking about hers and Maci would be silent if she had, so who knows?

Oh, and speaking of that encounter with Amber’s baby daddy Gary Shirley, I just can’t imagine that will make it in this season. It would just be too weird and demystifying to see the various stories overlap in that manner. (A Reunion special is one thing, but Maci and Gary partying together at a bar? That would almost be as bad as seeing Kailyn Lowry and The Situation on screen together, something we know MTV didn’t want because they actively prevented it!)

I’m also guessing that Maci and Kyle’s spring break weekend (you know, the one that gave us the infamous beer bong photo?) won’t be featured either – those pictures of Maci relaxed and having a great time gave me the impression the MTV cameras were nowhere to be seen!

Stay tuned for our preview of what to expect from Catelynn Lowell and Amber Portwood this season – it should be up later today! (It’s too hot to be out celebrating the 4th of July anyways!)

Want to offer up your thoughts on the upcoming season or comment on what has already happened (if you’re reading this after July 5) then hop on over to our brand new forum and help us get the momentum started!