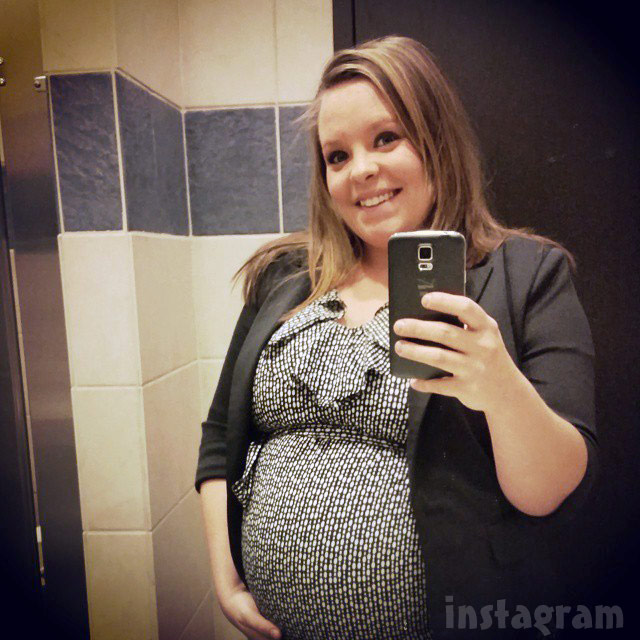 It was first revealed waaaaaay back in May that Teen Mom couple Tyler Baltierra and Catelynn Lowell were expecting a second child together, their second after placing their first daughter Carly for adoption in 2009. Mom-to-be Catelynn updated fans with a brand new baby bump photo (above) over the weekend, writing, “Baby girl…almost 33 weeks.”

In addition to the HUGE news that they are going to be parents, Catelynn and Tyler have lots of other positive things happening in their lives right now as well. In addition to returning to MTV for a new season of the original Teen Mom (sans Farrah Abraham), the couple has reportedly set a 2015 wedding date and will be releasing their book, Conquering Chaos, on March 15.

Congratulations to Catelynn and Tyler, who have stuck together through A LOT to make it this far. And just in case you’ve missed all the events over the last few months, here is a timeline with links of our coverage, including some more baby bump photos. We will kick things off with a trademark Tyler Baltierra photo and heartfelt message of appreciation for Catelynn:

My best friend. My savior. My lover. My angel. My other half. My soulmate and the most amazingly selfless mother of my children. How did I get so lucky to share this much love with such an incredible woman? Can't wait to watch her be a mom to our daughter! #MyCuteLittleMommaBear

May 11 – Catelynn Lowell is pregnant!

And just for fun, I’ll wrap this up by revisiting our plea to have Tyler instated as an official “Teen Mom.” 😉