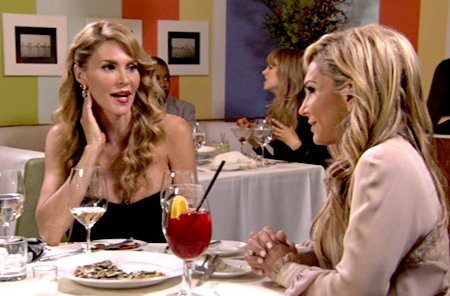 Tonight’s episode of The Real Housewives of Beverly Hills turned into a mystery. Brandi Glanville was gabbing with the girls at a food tasting at Lisa Vanderpump’s restaurant SUR, and suddenly she said something about Adrienne Maloof that shocked everyone. She said that Adrienne is a liar, and that she especially lies about this one thing, But, the viewers won’t ever know what was said because it was edited out!

Later, at an event for Mauricio’s real estate company The Agency (which Mauricio said was gonna pull in $600-750 million in the first year), Kim Richards told Adrienne and Paul what Brandi said and they were livid. Adrienne immediately said what was said was defamatory, and she was going to file a lawsuit. All we can glean from the comments people made about what was said is that it has something to do with Adrienne and Paul’s family?

Paul: “Someone says anything about my family, I’m not going to take that lightly.”

Adrienne: “Brandi crossed the line and hit below the belt. I can’t believe Brandi would sink to this level…this is absolutely so classless . . . This girl lies 24/7. She had too much time on her hands. She’s not taking care of her own kids!” Adrienne charges.

At the end, Adrienne accused Brandi of being a drug addict, which they didn’t edit out. With all the things Real Housewives have said about each other over the years, what could have convinced Bravo to completely censor what Brandi said, but still have it be an integral part of the storyline?

UPDATE – It appears as though all the rumors that Brandi accused Adrienne of having her children via a surrogate may be true. “There’s a gathering that most of the cast attends except Adrienne,” a RHoBH insider tells Wetpaint. “And during the party, Brandi takes issue with the fact that Adrienne insists she had her three boys naturally, while Brandi insists Paul and Adrienne used a surrogate.”

Kyle Richards addressed Brandi Glanville’s remarks about Adrienne Maloof on her Bravo blog, writing “What started out to be a simple food tasting turned out to be the start of a very intense feud between Brandi and Adrienne. What Brandi said at the table was a very private matter. What she says Adrienne “lied” about, does not fall into the category of a lie. It falls in the “it’s nobody’s business” category. Not about anyone else except her family. It doesn’t effect Brandi or any of us in any way, shape, or form. I understand when you’re upset with someone you say things you don’t mean, but talking about private family matters is below the belt. It had gone too far.”

I felt bad because Brandi and I have our ups and downs but we were in a good place and now this. Regardless of why she said what she did, it was wrong. There was no denying that.

I understand Paul being so protective. He felt he was protecting Adrienne and his family. I have never seen Paul upset like that and know him to be a kind, gentle person.

I know its frustrating not to hear what was said, but it is a private matter. Yes, this is a reality show and we all put our lives out there, but to some, certain things are too sacred.

Adrienne and her husband Paul have since split, and they have both accused each other of some terrible things.