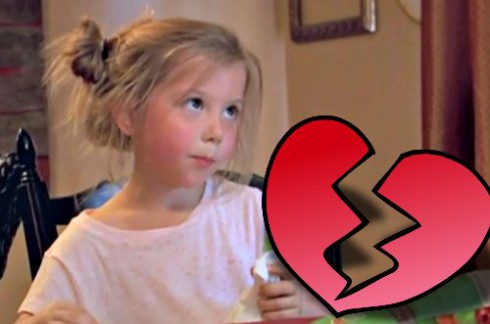 The new preview clips for this week’s episode of Teen Mom 2 are already proving quite controversial. Get a summary of that drama and see what else to expect on Thursday night…

Throughout Teen Mom 2, we’ve heard Chelsea mention (usually with justification) that she wishes Aubree had a better father figure. In this clip, we learn Aubree feels the same way, especially after spending Father’s Day weekend with Adam Lind’s family and never actually getting to see him.

When Chelsea then asked if Aubree was excited for Cole DeBoer to move in, Aubree said yes — and she wishes her own dad was like Chelsea’s new man. Break our hearts a little more there, Aubree! 🙁

After her latest domestic violence arrest, Jenelle meets with her lawyer to discuss options. Now, if it wasn’t for a different lawyer than good ol’ Dustin, you could think MTV just recycled this clip….But, it’s a new meeting, and the lawyer really wants Jenelle to know how serious her situation is.

“We will have a court date. It’s not anything we can take lightly. I mean, you’re looking at 30 days in jail, you’re looking at a fine,” the lawyer explained. “And the problem with criminal domestic violence is it carries the penalties of a felony.”

Jenelle said she understood, but the lawyer pressed on:

“This should have never escalated to this level,” the lawyer said, between deep breaths. “And it can’t happen anymore because your child deserves better than that….The issue is, you guys use your baby as a pawn to hurt the other. I know he’s doing it and I know you’re doing it….And that’s not the game we’re going to play because the only person that loses is Kaiser.”

Jenelle repeated she gets it.

When Kailyn, Javi, and Lincoln show up to watch Isaac’s last soccer game of the season, they’re frustrated to learn Jo Rivera had the time wrong and wasn’t there with Isaac.

“He’s like, ‘I’m home. It’s at six,'” Kailyn told Javi upon hanging up with Jo. “I wish Isaac was here already. He’s going to miss this whole thing.”

Jo and Isaac eventually showed up after the game finished and Isaac got his medal…but no one looked very happy about the situation. (Especially Lincoln in that screen shot, am I right?!)

Now for the clip that’s causing all of the drama: Leah Messer’s two ex-husbands, Corey Simms and Jeremy Calvert, met up to discuss #LifeAfterLeah. Both guys agreed they were miserable during their marriages and discussed Leah’s rumored drug habit.

“She went from being normal to a compete 180,” Jeremy said. “Prescription pill problem.”

Corey agreed, adding, “This drug issue, that everybody knows she has, is swept under that carpet, and [she] don’t want nobody wondering where she went. We’re the father of her children. We need to know what’s going on with the mother of our children. Why are you sweeping it under the rug, acting like there’s no big deal? If it was us, what would happen?”

Both guys then admitted they are afraid Leah will end up hurting herself or their daughters.

“My biggest fear is she’s going to keep getting away with sh!t until one of these nights me and you are going to get this f**ked up phone call ’cause mommy done f**king made a big boo boo,” Jeremy said. “And that’s when I’m going to go f**king ballistic.”

Corey said he feels the same way, explaining, “Every time I hear about a wreck in this area, I freak the f**k out ’cause I’m thinking, ‘Holy f**k.’ That’s why I’m being the d!ck.”

After the clip was posted, Leah claimed on Twitter that the footage was manipulated to make it look like Jeremy was talking trash.

I talked to Jeremy the whole time … Jeremy can’t stand Corey .. This was definitely SET UP and not even the truth. Don’t care if I do get in trouble this is BS .. I should open my mouth way more. In the scene you can tell Jeremy was looking over at a producer saying something about a prescription pill problem and they edit it to where it looks as if he is saying that to Corey. I could go on but its best I didn’t … Not to mention Jerm just told me this scene was filmed before I even left the FIRST time.

Catch the new episode of Teen Mom 2 on MTV this Thursday at 10/9c to see how everything plays out!