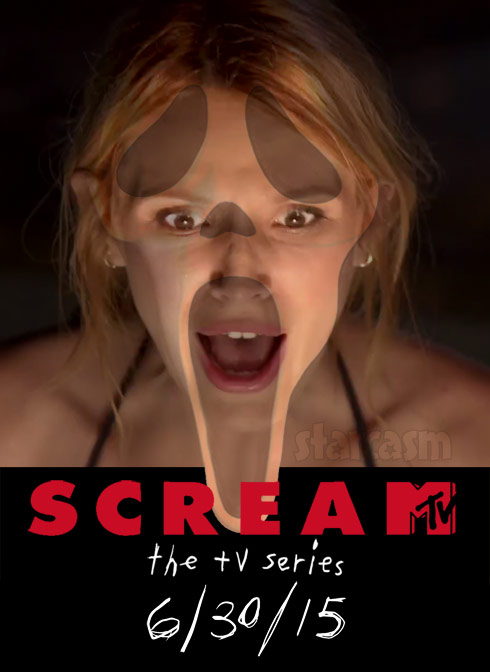 Last night was the 2015 MTV Movie Awards and the network used the opportunity to unveil the first preview trailers for their new Scream series based on the popular slasher film franchise. The extended preview trailer begins with an attractive young blonde in a bikini (the first item to check off in any slasher show, right?) who receives a “heads up” via text message before receiving a heads down… in her hot tub!

“You can’t do a slasher movie as a TV series,” says the show’s requisite horror film expert. “Slasher movies burn bright and fast. By the time the first body is found, it’s only a matter of time before the bloodbath commences.”

The guy knows what he’s talking about, and it will be curious to see how MTV handles stretching a slasher film out over a full season(s). It’s one thing to wonder which main character is going to make it over an hour and a half, but how suspenseful is it going to be knowing that the main cast members will probably be safe for nine or ten weeks at least? Of course, MTV could be taking a Game of Thrones “no one is safe” approach, which seems to be hinted at by the trailer’s narrator. “Everyone has secrets, everyone tells lies, and everyone is fair game,” he says.

I suppose we will have to wait and see! Scream the TV series premieres June 30 on MTV.

Until then, here is a little plot synopsis followed by some additional teaser clips for the show:

After a cyber-bullying incident results in a brutal murder, the shocking violence stirs up memories of a killing spree from the past that has haunted some, intrigued others and maybe just inspired a new killer. A group of teens – with two old friends struggling to reconnect at its heart – become lovers, enemies, suspects, targets and victims of a killer who’s out for blood.

“It always begins in a cute little town, but the moody music and gravelly announcer telling us “THIS SUMMER” means we’re watching a horror movie trailer. Cut to pretty girls looking over their shoulders and startling footage of blood and carnage. But what if it’s not a movie? What if, instead of 90 minutes of guts and gore it’s ten hours? Sure, the reason you watch each week is because you fell in love with the characters, but maybe, deep down, you know the reason you keep coming back is to watch them die.”

Click here to meet the cast of MTV’s Scream the TV Series!