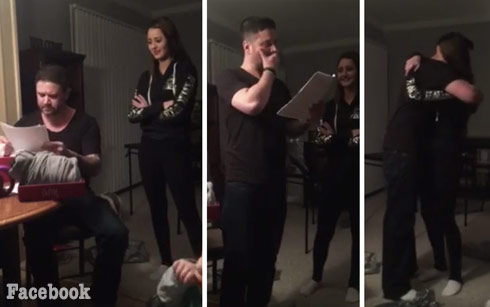 An Illinois woman has captured the moment that she asked the man who raised her to officially become her father. Misty Nicole Knight wanted to do something special for the man she calls dad. While Ryan Farrell may not be Misty’s biological father, he is the one who stepped up and did all the things that makes someone a dad in all the ways that really matter.

On March 5th, Knight posted a video to Facebook showing Farrell receiving a present from Knight along with the following note:

I just want you to know that you are the most amazing man I have ever met. You’ve raised me my whole life, from putting my hair in tight Princess Leia buns, forging my signature in fifth grade, jamming out to alternative music, going on the Warped Tour and even our first rock concert together, leading up to us laughing at cats wearing leggings. I know we are so weird together, but that’s what makes you, you, and I cannot imagine not having you in my life. I’m so grateful to be able to call you dad. You’re probably wondering what this letter is for – well, open the d**n present already!

Inside the box, along with a Batman vs. Superman adult onesie, were official petition for adoption forms!

Ryan’s unable to hold back his tears as he embraces Misty. When he regains his composure, Farrell says, “I’ve been wanting to do that forever.”

As of this post, the video has garnered over 20,000 shares. Misty has been inundated with friend requests, and even joked about maybe making it on Ellen.