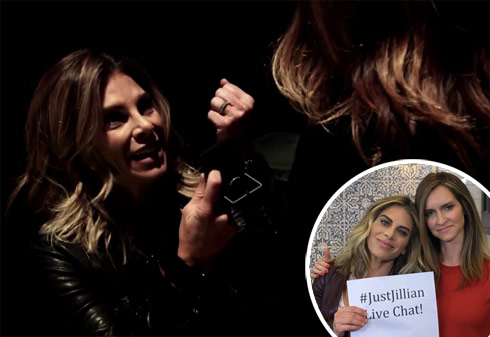 Fitness guru and former The Biggest Loser star Jillian Michaels is engaged to longtime partner Heidi Rhodes! During Tuesday’s season finale of her current show, Just Jillian, the trainer invited Rhodes to a private theater for a very surprising and romantic proposal.

Before Michaels got down on one knee, she played a short film featuring images of the pair’s life together, including their two children. At the end were pictures of friends and family holding signs that read “Will you marry me?”

“I know I’m an a***ole a lot of the time,” Jillian said, “but, if you will continue to put up with me, I would like you to marry me. And even thought I gave you that ring, I got a ring.”

When a fan asked Jillian via Twitter after the show about what Heidi thought of the movie idea, she answered, “She found it very sweet. She was in tears. Mission accomplished.”

Michaels added that the engagement happened about four months ago.