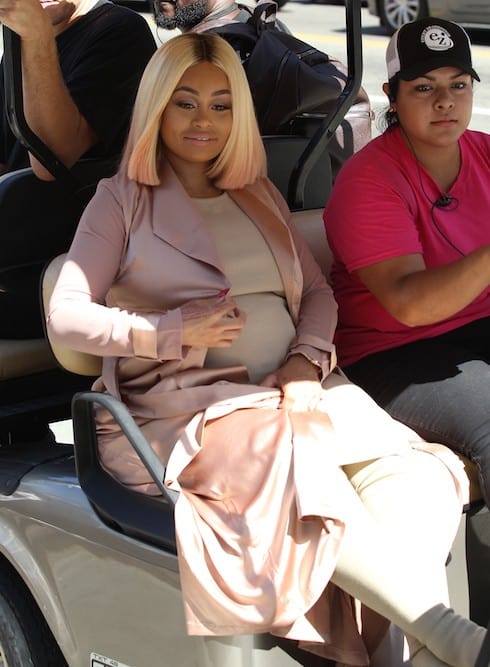 Are Blac and Rob still together? The question is increasingly common, of late, thanks to a bevy of breakup rumors and allegations detailing the apparent frail state of their relationship. Now, with Blac set to give birth in a matter of weeks, it seems she might have “devastated” Rob by withholding from him the one thing he was possibly looking forward to more than anything else: namely, to be by his fiancée’s side when she gives birth to their daughter. Blac revealed her due date–November 18th–in a surprise Instagram post this week, but the news came amid several reports stating that she and Rob have been living in separate houses for weeks, and have no immediate plans to move in together. Furthermore, a flurry of furious allegations from Blac’s mom Tokyo Toni state flatly that the pair actually broke up months ago, and are only together for the benefit of E!’s cameras. Toni claimed that Blac and Rob are contractually obligated to film a wedding special for Rob & Chyna, whether or not the show gets picked up for a second season. (It’s probably worth pointing out that while Blac has a due date, there doesn’t appear to be a Blac and Rob wedding date as yet.)

But a new report from OK Magazine alleges that Blac is fed up enough with Rob to decree that he is to be banned from the delivery room when she does give birth. Apparently, he had planned to be by her side all along; now, Blac would rather not have him there. “Chyna’s kicked Rob out of the house they share more times than he can probably count on two hands,” their article claims, and their source appears to confirm the drama: “They’re always on edge when they’re around each other. Chyna is tired of the constant fighting and doesn’t want the added stress when she’s in labor.” Rob is said to be further bummed because during Chyna’s pregnancy he’s put back on more weight–approximately 50 pounds, if the rumors are true–than he lost while the two were in the earliest stages of their courtship.

“Rob’s already feeling down,” their insider added. “If Chy sticks with her ban, he’ll be devastated.”

As Blac herself reminded fans recently, she is down to less than one month until delivery:

(Photo credits: Are Blac and Rob still together via Instagram, 3rdEye / WENN.com)