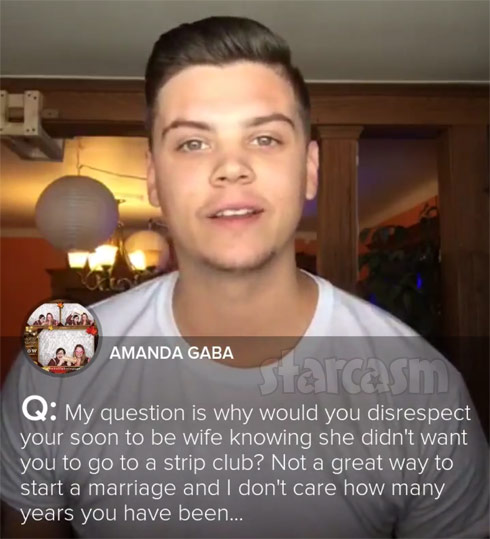 MTV continues its fan Q&A sessions with Teen Mom stars on Facebook, and earlier today it was Tyler Baltierra’s turn. There was an added bonus for fans this time around, however, as Tyler answered several questions via video — including his take on his controversial strip club bachelor party featured on Monday night’s episode!

“First off, me and Catelynn both decided and agreed…that we were going to do separate bachelor and bachelorette parties,” Tyler explains. “What MTV cameras didn’t show is that Catelynn had a stripper on her bus, and she got lifted up, and she smacked him,” he reveals. “I didn’t really ask what she did. I don’t really know what she did with that stripper. Whatever. They filmed it, they just didn’t show it.” 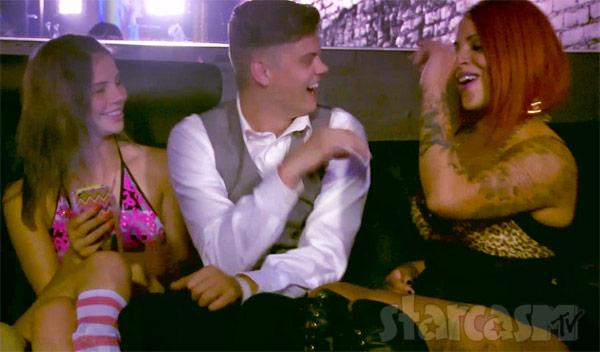 Tyler reveals that he had never been to a strip club before and only went because “it’s kind of tradition. It’s what you’re supposed to do.” Here’s most of the rest of what Tyler said in the video response, followed by the full video, and the rest of his Facebook Q&A:

It’s not disrespectful to Catelynn only because, first off, she knew about it. Second off, she agreed on it, and said it was OK. And third, she had a stripper as well. So, we both had an agreement. I know the show made it look like she was very hesitant and didn’t want it to happen — the fact is that the reason why she responded that way was because the producer was bringing it up a lot, and asking questions, and in my opinion trying to get a little bit of a rise out of her and make her get a little upset about it.

The thing about me and Cate is that we talked about it and it was, like, “If I can’t trust you to go to a strip club, then I should reevaluate if I want to marry you.” I should be able to trust my wife going anywhere, and vice versa. She should be able to trust me going anywhere. I don’t care if she was around 80 million man wh0res with, you know, ten-inch dicks — I don’t care! All I’m saying is that my job is not to trust all those people around her. My job is to trust her. And I do trust her. And she trusts me as well.

I’m pretty sure if you watch it you’ll notice that I do — you know, once that girl rubbed up on me and her skin touched me, I kind of got uncomfortable. It was enough. “I’m done.” I told her, “You gotta back off.”

She knew what I was going. I knew what she was doing. We have open, honest communication. We both trust each other very much, and it worked out fine.

FAN: You are mature well beyond your years and more than most men I know way older than you. Since your father wasn’t the best role model-did you have one? Who do you look up to and get advice from?

TYLER: I had no example of what a man is supposed to be like. But I honestly acknowledge that this was a blessing because I got the opportunity to create my own ideal of what type of man I want to be, rather than having an example pushing their own idea on me. I had complete freedom in deciding what type of man & father I want to be like with no influence other than what I witnessed in a house full of women. It was a blessing in disguise I think.

Do you ever regret placing your first daughter up for adoption? You’ll are such a great couple.

No I do not. Because she is exactly where she was always meant to be. I hold pride in completing another family’s dreams by blessing them with a child they couldn’t have on their own.

How long have you been with Catelynn? Are you glad you married her?

Been with her for 10 years & I’m BEYOND happy that I can call her my wife!

Did you guys go on a honeymoon? If so, where did you go?

Hawaii! It was AMAZING!

You and Catelynn are perfect together and have shown so much strength throughout the years. In the car, who gets to pick the radio station? And what genre is it?

We both like the same music…no rap (unless it’s Bone Thugs, Biggie, Eminem, 2pac) but we listen to Dean Martin, Sinatra, Beatles, Louis Prima, Aerosmith, Journey, Nirvana, etc…there’s just too much to list lol we like old music!

Do you think when your daughter watches the episode of you at the strip club biting your lip and shoving money in a girls undergarments they will respect you and feel that other men will respect them when they are should be all their future spouse need to be happy. If Catelynn ever feels insecure I wonder why? It broke my heart watching you act like that. I watched every episode and related to many things about your relationships and children. You should listen to the country song “Diamond Rings and Old Bar Stools.” Only worse you have a strip club with half naked woman. … ?

To be honest it was most likely a mistake to have it filmed. But it was a part of my life at a time when cameras were following me, so it is what it is. Cate had a stripper too, they just didn’t show it. We both agreed on what we were doing. Remember, what you watch is cut & edited in certain ways to heighten the dramatic appeal. But yes, I shouldn’t have had it filmed.

What are your religion beliefs?

Religion is a man made thing…I don’t practice one…I just live my life with an open mind, open heart & help others when I can while living spiritually.

What’s the craziest thing a fan of yours has done? Lol

Craziest thing was from a girl who sent me naked/masturbating pics…not cool. I wrote her back telling her to get some class, self respect & dignity & maybe, just maybe a guy will take her seriously.

What do you like the most about Catelynn’s inside and outside?? 🙂

My favorite thing about Cate on the outside is her eyes. She’s got the most beautiful blue eyes & lashes that go on forever, I get lost in them. My favorite thing on the inside, is her heart’s capacity to love, cherish, sacrifice & support. Her heart & soul are immeasurable when it comes to those things & I LOVE that!

Do you have a real job?

A paid position of regular employment? Why yes, yes I do lol!

I love you gave Carly a great life, what I don’t get is why parents give their first kid up, then have another one years later… to me its a bit selfish. “I couldn’t provide a good life to my first kid, but now that I’m in my twenties, I’ll just have another kid to replace the first one.”

Well at the time I couldn’t provide the life she deserved. I was operating my life with a very naive, underdeveloped, selfish, & immature brain. At the age of 24 now, I have solidified my relationship with my soulmate who will be the mother of my children. I have grown maturely, I have the mature mental capabilities I did not have at 16, I have a home, financial security, & a healthy relationship with Cate. Nova was NOT a replacement at all. She was a decision we made as a couple at a time when we were ready & capable of giving her innocent life what it deserved.

Someone please ask, at the time he was at the strip club was he even thinking of Catelyn? When the topless stripper lapped him.

To be honest, no I was not. Not until she pressed her chest against my face & then I got uncomfortable & just wanted my wife there. Not that she smelled bad or anything, but I have only been with Cate for 10 years so having a strange woman’s skin that didn’t smell like my babe turned me off immediately lol!

What will you do if Brandon and Theresa cut you off totally, from seeing Carly? You guys are the best couple on the show..They need to get rid of Farrah…

If they ever did that (Which I don’t think they would) I would be heartbroken but would also start preparing for Carly to come find me one day, by writing her letters & saving them. Buying her gifts & saving them. Pretty much make a Carly room so that when she does come find me, she will know I wasn’t the one who cut her off. It was her parents & then her disappointment will be on them. They will have to explain to a little girl why they cut us off & they will have to deal with the consequences.

Do you ever learn anything from being in the spotlight?

Yeah, that society has a a lot of improvement to do regarding compassion, being open minded, and understanding.

How was your father/daughter dance with Carly? It looks so bittersweet.

The most intense, emotional thing I have experienced!

I love how y’all remodeled and decorated your house! Was that all Cate or did you help decorate too?

It was actually ALL ME lol She is not into all that. She would be fine having everything white & beige lol

Uk mum here…. You and Caitlyn have been together for years. What keeps you two going? Obviously there are arguments and you both do things to annoy each other, but what made you stay together? You are my favourite couple of Teen Mom and are still going strong while other Moms have new boyfriends and baby fathers. 🙂 X

Compromise, open & HONEST communication, reminding each other why we love one another, respect & recognizing that the best love is worth fighting for & the best type of love grows not fades.

Has [Nova] got to meet her big sister?

Yes she has & it was mesmerizing!

Do you and Cate have plans for more children?

Hi Tyler, what is your favorite thing about being a dad to Nova?

My favorite thing is when she squeezes me with a hug & rests her head on my shoulder. Then we just dance back & forth with each other lol! She’s so adorable!

Will Nova be attending public school, or do you guys worry about her being a public figure interfering with her education?

She will be in public school definitely! I want her to experience all the necessary social challenges that will shape her social communication skills for her future.

What is Nova’s favorite toy or thing in general?

Anything that makes musical noise!

Tyler, how do you do it?

You can see more of Tyler, Catelynn, Nova, and maybe Carly by tuning in to new episodes of Teen Mom OG, airing Monday nights at 10/9c on MTV!