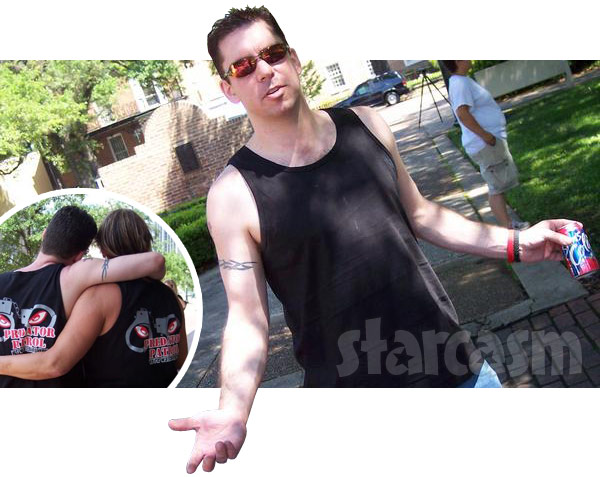 Things are not looking good for Teen Mom star Amber Portwood’s fiance Matt Baier. On last night’s episode it was revealed that there are five women who have filed child support claims against Matt for seven of his alleged children. Just prior to the episode airing, another of Matt’s exes (not one of the five filing for child support) also came forward saying that she had a daughter with Matt and that he was a “con man” who proposed to her in much the same way that he did to Amber Portwood. She also claimed that Matt has at least one more child (which would make the total 9) with another woman.

The national exposure for Matt seems to have resulted in a clown car effect as yet another of his exes is speaking out against him, once again accusing him of being a con man. Thankfully, there doesn’t appear to be a child(ren) involved this time.

UPDATE – We have since spoken with Judy and she wants to make it clear that she and Matt were never actually in a romantic relationship together. “I am not his ex,” she clarifies. “I busted him before there was a ‘relationship.'”

The latest soldier in the Matt Baier hater army is Judy Cornett, who has become a national spokesperson for sexual predator awareness and victim support after her eleven-year-old son, Jason, was abducted, raped, and left for dead in 1992. She later founded Safety Zone Advocacy, Inc. and shared her story on multiple television shows, including Oprah, Leeza, Montel, 20/20, The O’ Reilly Factor, and more.

Here is Judy from her appearance on Oprah: 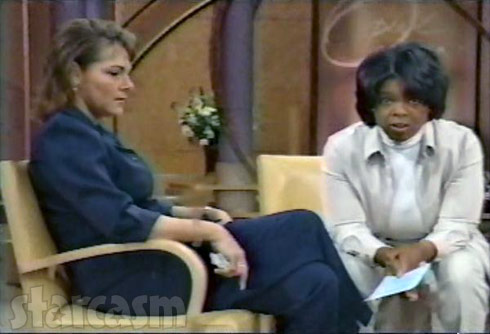 According to her tweets, Matt met Judy through the book he wrote under the alias Grey Baker. The book is titled Guys Don’t Rat on Guys, and is the story of Kevin Hurley, an adult victim of child abuse coming to terms with his past. The subject matter would obviously endear him to Judy, given her dedication to the cause of victims of sexual abuse. “Many people tell me he wrote the book so he could try to get into my life,” Judy revealed on Twitter moments ago.

Matt Baier was with Judy Cornett at a 2008 rally in Mobile, Alabama to raise awareness for the case of Rebecca McEvoy, a young girl who was molested by her stepfather but died in a car accident while on the way to testify against him. At the time, it was looking as though Rebecca’s death might mean her step-father would go free, which had many outraged. Here is a photo of Judy and Matt together: 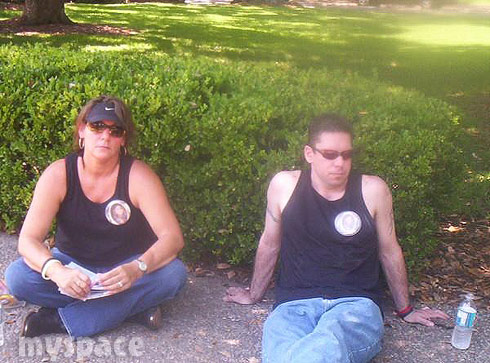 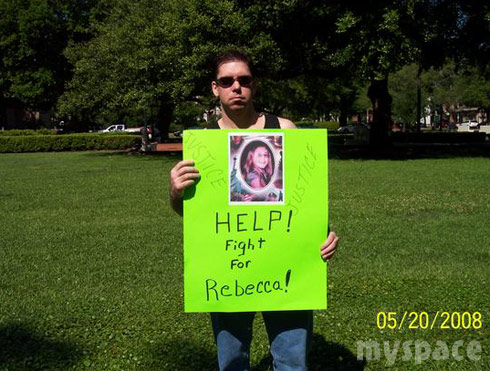 And here’s another photo of Matt with a news reporter covering the rally and Rebecca’s story: 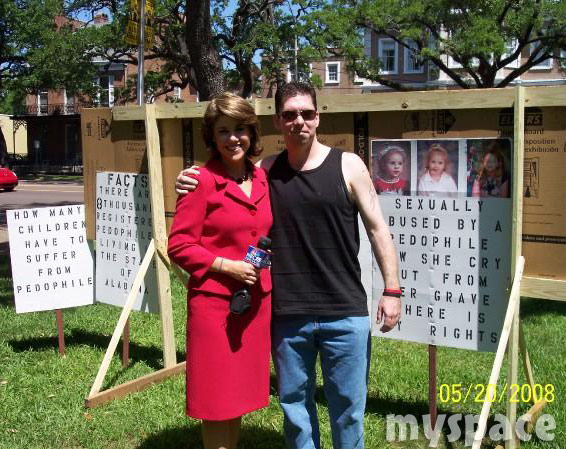 Judy was completely unaware that her former (almost) boyfriend Matt Baier (aka Matt Baker aka Grey Baker) was currently engaged to Amber Portwood and appearing on Teen Mom OG — until last night. Once she became aware, however, Judy unleashed a Twitter tirade against Matt that is still going on as I type this!

In her tweets, Judy calls Matt a “huge thief,” a “liar,” and a “con man.” She also says that she has no recollection that Matt ever had drug addiction issues, something that bonded him with Amber.

Here are some of Judy’s many, many tweets about Matt over the past 24 hours. (I’ve included some of the tweets that Judy was responding to in brackets.)

Matt during the time you conned and stole the money from me lied to me manipulated me told me you wanted to marry me pic.twitter.com/5kFXt30tmv

@mattbEPT @amberlportwood amazing mat you finally made it to somebody who has some money. I’m not going to shut up the truth will prevail

[The truth needs to come out about this! I remember all of this happening to Judy!]

yes he is claiming to be the vice president of my organization what a bunch of crap.

Matt you have just crossed my path again, this is going to be interesting.

@NevSchulman Matt Baier AKA Matt Baker AKA Gray Baker is a con man!! Amber is being manipulated!

[THE ASHLEY’S REALITY ROUNDUP: One of Matt’s former fiances told me about you and your story. Would love to discuss in more detail what happened to you!]

[What a joke and why or u just now saying something? The show been on 4 a minute now]

[hmm understandable just asking but what is Gary supposed to do?]

[Oh! How the skeletons are going to start flying out of those closets!]

they’ve been coming out from what I’m seeing!!!

@CatfishMTV Amber on “Teen Mom” is blinded by manipulation and lies!! Matt is a CON! Matt Baier AKA Matt Baker AKA Grey Baker

I was woken up last night at 1am to find out Matt Baier is still at his conning and manipulating ways, he is now on TEEN MOM – MTV!

@MTV I am not surprised Matt Baier is still conning, thought he’d be busted by now!! AMBER – TEEN MOM – OPEN YOUR EYES!!

@AmberLPortwood @MTV get away from Matt, he is using you!! I have personal history with him!! I put his a** in a taxi after stealing money!

@MTV OMG! Matt, all the women you conned (me included)…I am feeling so bad for this girl!! I know you personally, don’t I Matt?

I am surprized he still has balls, how can he even walk with pride!!??

I recall when he call me because he got kicked out of his house with Michelle another victim of his billsh**!

@mattbEPT What an idiot!! I hope you get kicked to the curb and have to eat out of dumpsters!!

Can you deny this pic Matt Baier AKA Matt Baker AKA Grey Baker?? pic.twitter.com/aVIugHGE21

[I feel horrible for her. She is concerned about looking foolish..maybe let her know that falling prey to a con says]

Its not going to get better! How much older is he than her?? SAD!!

[she is only 24/25 & has been through a lot in her short life. Is he really a recovering addict?]

I did not know anything about him being a recovered addict.

if so he still is and his drug of choice is MONEY! Chasing fame and it’s not HIM!

That’s alright Matt Baier you can block me all you want it’s the other people that need to know about you you already know who you are!!

Matt you are disgrace! How dare you prey on a young girl? pic.twitter.com/jKapPXWL9m

[for sure! A way to profit off her…Now he’s all about sobriety & sober living houses]

it will not get better he is a huge thief he is a liar and a con man.

[im sure she is aware now & is angry, embarrassed & conflicted. She’s smart & in the future she will look back & be thankful it all came out.]

Absolutely,I hope anyways! He has been with so many other beautiful women he conned!

[why does he have so many different aliases? What is he hiding from?]

[Apparently Matt is an author too hmmm.]

His book was a lie and people found out!!!

I have a stack of his books!!

Matt How can you sleep at night?

@MattbEPT I will do all I can to get the truth out. I am on an army of MATT HATERS!!

I nailed his a** after about 2 weeks of him being in Tampa. BUSTED!

met online, he scammed me with his book and said he had bonds to cash.

How can Amber even look at his lying eyes! Public humiliation, what about the kid??? OMG

I have nothing to hide and all to share! BUT will it change anything? I hope so!!

[I feel genuinely bad for Amber. This could be completely shattering for her.]

I AGREE but better now than after marriage and buying house!! Better than after he robs her of everything!

he will take it all and con her to the end!!

[Matt went after Jenelle and Farrah first. He was VERY obsessed with teen mom.]

Imagine that! While he was conning me I uncovered a list of women! Some married!

Obsessed with any female that will take care of his loser a**!

[@AmberLPortwood please look in to what this lady is saying..he seems to have a history of targeting people in public eye ?]

Yes he does but also easy targets caring sweet women who are looking for love. A CHARMER with BAD BREATH!

[I knew there was something off with him he couldn’t answer ?s about his DOC]

I dont believe he is a recovered addict, never saw that part nor mention of it!!

[I think you are right.She should be running for the hills but I think her pride will stop her]

HER PRIDE is getting destroyed by staying with him!!

[I don’t understand why Amber can’t see what’s so obvious to the rest of us, she’s not dumb.]

[I’ve always had a soft spot for Amber as her eyes give away her pain. She doesn’t need more!]

he has nothing to offer her but a partner to help her spend HER & DAUGHTERS money! No family, no money no nada!

@lindsaycenari I am not surprised!! He has conned so many women, I had to hear them cry on the phone! Lies Lies Lies!

I believe Amber is codependent, she has low self-esteem and also fear of abandonment.

[Why won’t *Amber* listen? Everything she’s overcome. How can she not step back and look?]

[im sure she is.Its hard when you want to believe in someone manipulating you. she’s smart. Logical will prevail. So sad for her ?]

[probably but even on the episode last night you could see reality sinking in. then she probably listened to his bs for a few days and is so wrapped up she wants to believe him. I really think she’ll realize what’s going on]

[I’m afraid that ship has sailed. She should have told him to get out]