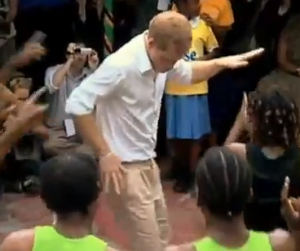 Prince Harry is on a Hot Eligible Prince Tour! Just kidding! He’s touring in place of his grandmother Queen Elizabeth II to celebrate her 60 years on the throne, called a Diamond Jubliee.

He kicked off the tour in Kingston, Jamaica (where the queen is still the head of state,) by “racing” against Olympian Usain Bolt (Usain let him win twice.) Then harry put on his hip-thrustin’ dancing shoes at a youth organization called Rise Life.

Even though the Prime Minister LOVED Prince Harry (who is touring under his official title Prince Henry of Wales) she still want to get rid of The Queen as their head of state. Talk about a diplomatic ploy! (In other news, Prime Minister Portia Simpson wouldn’t mind marrying Prince Harry, kidding again, but you know it’s sort of true.)

Harry “winning” against fastest man in the world, Usain Bolt: