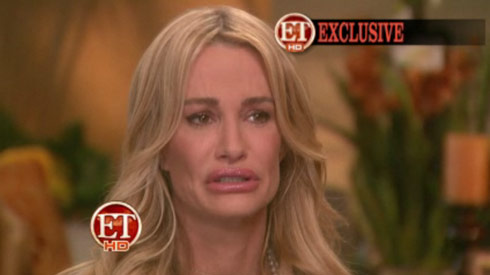 Here’s the full clip of that interview in case you missed it, followed by a summary of what an extremely wrought and emotional Taylor remembered from that fateful day:

The report begins with Taylor explaining that she didn’t see Russell’s body but that she desperately wanted to to give him one last hug but the emergency workers wouldn’t allow it understandably. Through tears she explains that the memory haunts her and that she thinks of it every night.

That day began with Taylor not getting any return messages from texts and calls she had sent to Russell. She and a family friend Francisco were let in to Russell’s rented Beverly Hills home by the landlord. She was told that his door had been locked for some time and she panicked feeling something was wrong.

One of the two men entered via a window and discovered that Russell had hung himself. Taylor ran into the street and laid down crying and screaming. As she lay there devastated she realized her daughter Kennedy was there and that she had to pull it together for her. She told the emergency workers on the scene that she had to get Kennedy out of there before they took Russell’s body out of the home.

Kennedy is seeing a child therapist and Taylor explained that she still wears her wedding ring and Russell’s because she’s trying to do anything she can to feel close to him. Taylor then went in to detail about the violence she suffered at the hands of Russell. She talks about being in bed with her daughter when Russell would come home and scream and yell at her. She did say that Russell was “good” about not physically abusing her in front of their daughter.

At the conclusion of the interview the subject matter turned back to Kennedy and Taylor stated that her daughter asked her what would happen if she and her grandparents get sick and die and that she went all the way down the list to the pets with this question. Taylor said that she explained that Russell was sick in a different way than the way they would get sick. She wanted her daughter to know that she would not be left alone.