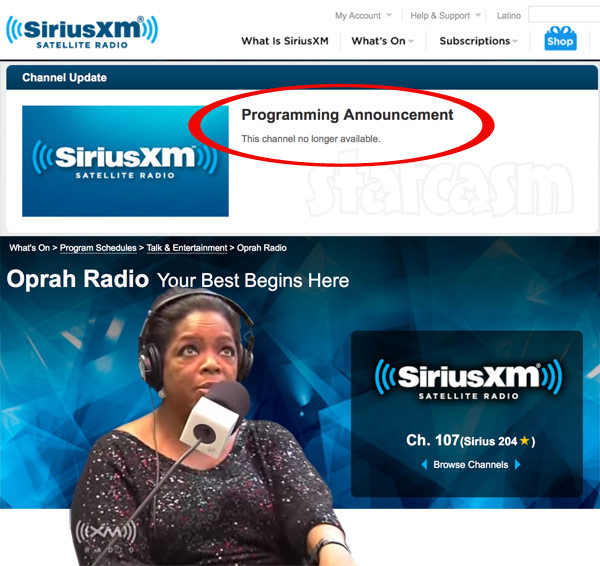 We have a good suggestion for the next Oprah: Where Are They Now? episode: Sirius XM’s Oprah Radio! Listeners to the popular channel that featured shows by notable hosts like Dr. Oz, Gayle King, and Dr. Jenn, were surprised to tune in on January 1 and find the channel had gone silent. And not only has the channel gone silent, but so have Sirius XM and Oprah’s Harpo Radio, Inc. — neither of which have offered up any official explanation as to why the channel was dropped.

Relationship talk show host Dr. Jenn Mann is the only one to offer up any sort of explanation, but it’s obvious she is not being allowed to say too much. “Your questions answered as best as I can about the future of @DrJennShow on the radio,” she tweeted along with this Q&A list:

Most Frequently Asked Questions about The Future of The Dr. Jenn Show

WHAT HAPPENED TO OPRAH RADIO?
They are no longer on Sirius XM.

WHERE IS YOUR SHOW GOING TO BE?
The Dr. Jenn Show will be back on the air soon!

I’M THINKING ABOUT CANCELING MY SIRIUS XM SUBSCRIPTION. SHOULD I?
No! You are going to want to hold on to that!

WHERE ARE YOU GOING TO BE AND WILL IT BE THE SAME TIME?
I’m not allowed to say yet but can’t wait to tell you as soon as The Powers That Be allow me!

WHEN WILL THE NEW SHOW START?
I am hoping to be able to announce that in a couple of weeks. Hang tight!

If you do some fairly simple reading between the lines I think we can assume The Dr. Jenn Show will be back on Sirius XM soon. On the other hand, Dr. Jenn did not seem to hint at all that Oprah Radio would be back. But, like she said, we will just have to hang tight!

In case you didn’t know, Oprah Radio officially launched on XM Radio under the name “Oprah and Friends” back on September 25, 2006 with a headline-grabbing $55 million, three-year deal. The channel was rebranded as Oprah Radio in 2012. If you do the math, 2015 is the next in line for the three-year contract cycle, so the timing seems right for something to change.