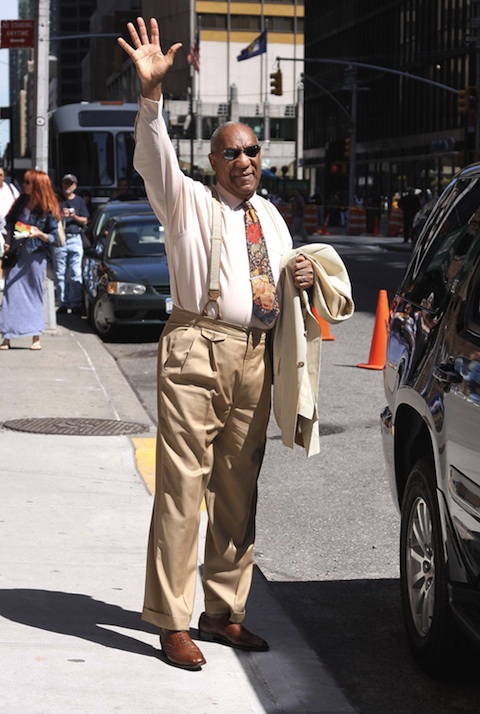 President Obama commented both directly and indirectly on the Bill Cosby controversy when he answered a question about revoking Cosby’s Presidential Medal of Freedom–something that’s never been done, for any recipient. Obama gave a general answer about the Medal, and a blunt one about the behavior of which Cosby has been accused.

A reporter at today’s White House press conference on the Iranian nuclear deal asked the President if he was considering revoking Bill Cosby’s Medal of Freedom. Cosby was awarded the Medal, which is the highest civilian award in the United States, by President George W. Bush in 2002.

Rather than ducking the question (or ignoring it, given the context), Obama answered it head-on. Here’s a truncated video of the press conference, courtesy of the New York Times:

“There’s no precedent for revoking a medal,” the President said. “We don’t have that mechanism.”

Then, after adding that it was his policy not to comment any pending legal action, Obama paused, and instead commented indirectly on the subject that’s plagued Cosby full-time for nearly a year:

I’ll say this. If you give a woman–or a man, for that matter–without his or her knowledge, a drug, and then have sex with that person without consent, that’s rape. And this country, any civilized country, should have no tolerance for rape.

Bill Cosby has been accused of sexual misconduct by 45 different women whose allegations span five decades. (Click here to see a complete list of the women and their allegations.) The statutes of limitations have expired on almost all of the claims, but, last week, the dam of public opinion appeared to break against Cosby. A 2005 legal transcript, in which Cosby admitted he had given Quaaludes to women with whom he wanted to have sex, became public.