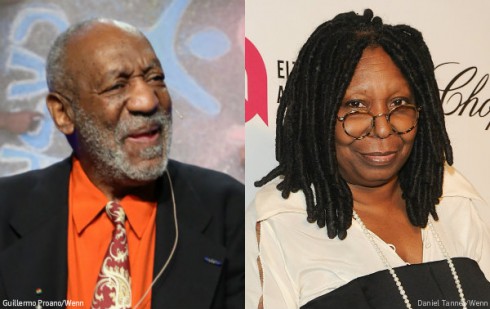 Days after saying she believes accused sexual abuser Bill Cosby is “innocent until proven guilty” in a court of law, Whoopi Goldberg has changed her tune.

“If this is to be tried in the court of public opinion, then all of the info out there kind of points to guilt,” she said on Tuesday’s episode of The View. For the first time, Goldberg also seemed to support the women involved — and suggested women in similar situations should come forward as soon as possible: “I think what you can say to women is don’t wait, because what waiting does is that it can make it harder to prove your case.”

Despite conceding that the information against him seems incriminating, Whoopi said she still doubts Cosby is as bad as a “serial rapist.” She explained, “I always thought they [the women] would have the opportunity to take him to court. As a serial rapist, why is he still on the streets? How is that possible?”

Whoopi’s comments come shortly after Judd Apatow encouraged her to “support the survivors,” not Cosby. He posted his message on July 9 with a series of tweets…

I think @WhoopiGoldberg is trying to be a loyal friend. It is sad that Bill Cosby is so sick that he puts his friends in that position. But @WhoopiGoldberg – he admitted to giving this (quaaludes) to women to get them to have sex. So what are you defending? Remember – @WhoopiGoldberg he paid off women to avoid the courts. So you can’t say the courts didn’t convict. He used wealth to avoid it. It is sad that he betrayed his community & it has soiled his achievements. But he did it. Not the press. 7 prescriptions. I believe it is wise to be careful but at some point we need to support the survivors of his violence.

During an appearance on The Today Show on Monday, Judd said he spoke out because, “When it’s 40 people [making accusations], it certainly is time for everybody to wake up and say we should be concerned about the women.”

See what Janice Dickinson said about Bill Cosby in 2002