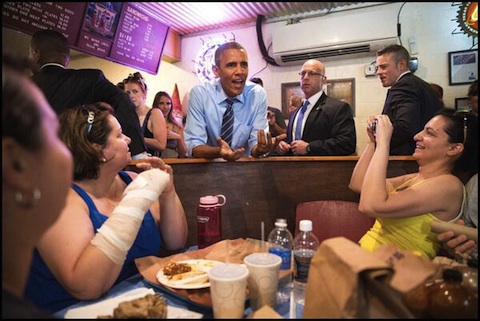 President Obama chatting up customers at Franklin Barbecue in Austin.

Daniel Rugg Webb is a cashier, musician and budding comedian from Austin, Texas. Recently, he got the social media audition of his life when President Obama dropped by Franklin Barbecue during his tour of Western states.

Obama was at the register, signing his $300 tab for another patron, when Webb smacked his hand down onto the counter next to the President and exclaimed “Equal rights for gay people!”

Without missing a beat, Obama asked, “Are you gay?”

Webb, startled by the President’s directness, responded, “Only when I’m having sex.”

At which point the President broke out a huge grin. “Bump me,” he said, extending his fist across the counter. 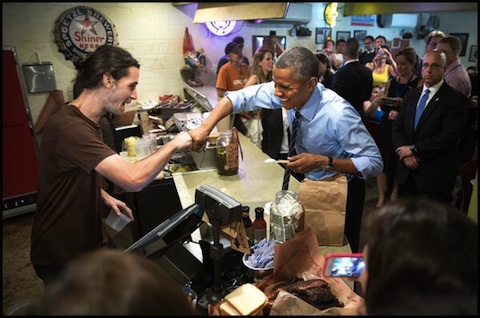 The bump heard ’round the world.

In an interview with Buzzfeed, Webb expressed great satisfaction over the exchange:

As a comedian, it was cool to have a moment where I was making a sitting president laugh — over something that might be considered inappropriate is a bonus….It would be interesting if he could call some people out [over gay rights]. People can use a lot of things—religion, freedom of speech—to be anti-gay, but I need people to understand you can call people out for civil rights things.

Webb said his only regret was that Texas’ Republican governor Rick Perry hadn’t come into the restaurant as well.

Scott Disick and Kourtney Kardashian together again, living under one roof and considering new babyproofing