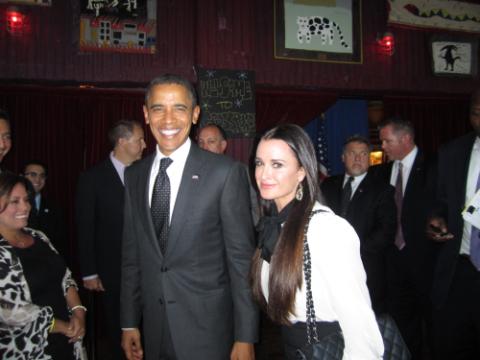 Oh man. POTUS was speaking to the National Urban League in New Orleans and one of the ways in which he suggested kids can compete globally is to quit watching The Real Housewives!

“You’re competing against young people in Beijing and Bangalore. They’re not hanging out. They’re not getting over. They’re not playing video games. They’re not watching ‘Real Housewives.’ I’m just saying. It’s a two-way street. You’ve got to earn success.”

You know not too long ago I recall that the First Lady was outed as a fan of the shows. Anywho, here’s the clip:

Now all you RH fans remember, POTUS was talkin’ down about kids watching everybody’s favorite Bravo guilty pleasures not adults. How about one more pic of the president with a Real Housewife? This time it’s Lea Black from The Real Housewives of Miami:

Since this post is in the realm of politics, where conspiracy theories abound, I would like to suggest that maybe this is the real reason there is no more Real Housewives of D.C.. I bet the F.B.I.R.H. (Federal Bureau of Investigations of Real Housewives) contacted Andy Cohen and had him fudge the ratings numbers so that they could have it axed. After all, this show did cast those former White House gate crashers, the Salahis. All of it is making sense now! Or maybe that version was just pretty crappy.

So kids of America, we let you down and we’re sorry. Don’t do as we do (like watching Giggy get puppy-pampered) but instead do as we and the POTUS say and avoid The Real Housewives!