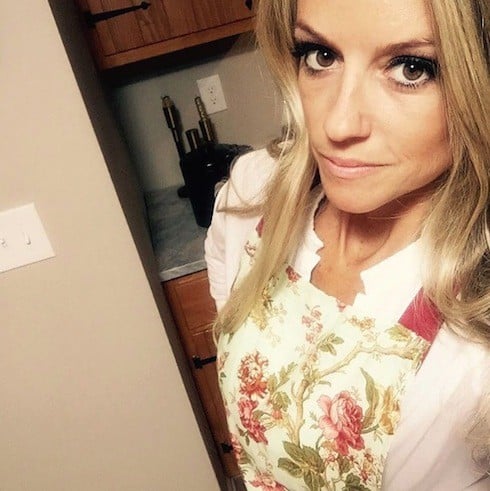 Rehab Addict fans intrigued by the recent birth of a Nicole Curtis baby but baffled by a lack of news about the child were both delighted and baffled by Nicole’s appearance on a Detroit radio show this weekend. Her interview on “Hire It Done,” a popular construction and renovation chat show, was carried on a Facebook Live stream–and featured Nicole not only showing her 18-month-old son in public for the first time, but breastfeeding him for good measure!

Here’s how things went down. An apologetic Nicole appeared to arrive late for the interview–as she explained to host Adam Helfman and co-host Julie Bertuzzi, the one-two punch of relentless promo for Better Than New, her first book, plus a European vacation over the holidays had her sleeping through her alarm. Nicole’s been famously private about her baby since his birth in the summer of 2015, but, possibly because of the harried circumstances, she brought son Harper with her. And while he was pretty well-behaved for the duration of Nicole’s talk, he did eventually require placation, in the form of a little microphone playing, a few sweet treats out of the diaper bag, and, finally, breastfeeding from Mom.

Fans of Nicole’s have been quick to point out that neither she nor the show’s hosts change their tone or the topic of conversation at all while Harper is breastfeeding. Except that the Detroit Lions’ (brief) appearance in the NFL playoffs came up–which is exactly what Nicole and Adam joked about after the show:

Had so much fun on @MyHireItDone -Adam having a good laugh at my knowledge of @Lions –#playoffs (I knew that)?

Judging by the general reaction on social media, most fans didn’t seem to be bothered by Harper’s quick snack. Helfman himself took to Facebook to declare “What do you do when your kid is hungry and you have a job to do? You feed your kid and talk about #homeimprovement.”

Only after the Facebook stream had ended and news of the story began to break did Curtis respond at all. Her reaction? “It’s just a boob!”