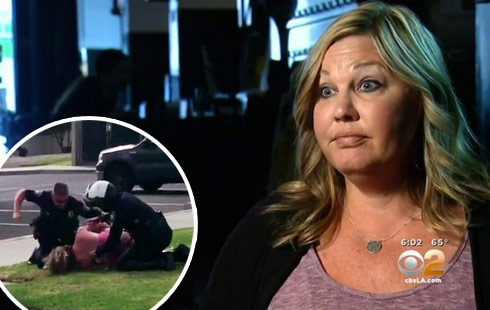 Cindy Hahn, a 40-year-old mom-of-two from Valencia, California, is suing the City of Carlsbad and several of its police officers, alleging that cops used unnecessary force by pinning her to the ground and repeatedly punching her during a July 2013 arrest.

Hahn spoke with CBS Los Angeles, stating that cellphone footage of the incident backs her version of what transpired on what she calls the worst day of her life.

She was pulled over for failure to wear a seat belt shortly after a previous run-in–one in which she says an officer cursed at her.

Hahn also indicated that this all happened in front of her children:

Following the altercation, Hahn was charged with two felonies: resisting arrest, and assaulting an officer. In July of this year those charges were dropped. Hahn’s attorney, Mark Geragos, believes the video was the deciding factor. “Never seen a police tactics expert testify that what you need to do is slug a female in the face,” he said.

The City of Carlsbad issued the following statement:

The City of Carlsbad looks forward to bringing this lawsuit before the proper judicial authorities as soon as possible. We are prepared to provide a complete and detailed account of the facts of this incident in a courtroom, not in the media.