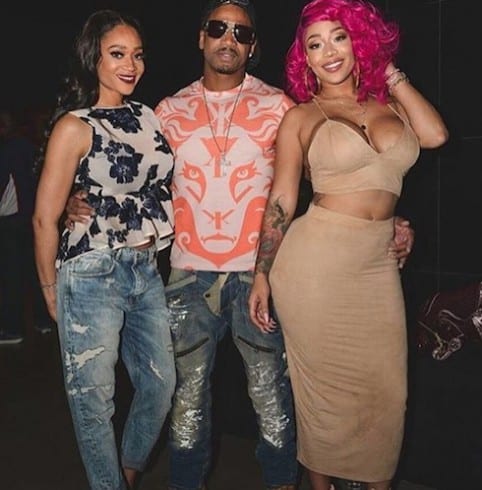 Mimi Faust and Stevie J have a long history together, which might be part of why she’s riding high on Stevie and Joseline’s misfortune following a series of Twitter attacks by Stevie’s ex Joseline. One day after Joseline claimed that Stevie J is secretly gay, Mimi admitted to VH1’s cameras she couldn’t help but be a little bit pleased by Joseline’s misfortune, now that the shoe is on the other foot where Stevie’s drama is concerned.

However, Joseline was not her usual smiling, shade-throwing self on the most recent episode of Love and Hip Hop Atlanta. Viewers were stunned to see the self-proclaimed Baddest Puta break down in tears as she turned to Mimi Faust for guidance after finding out about Stevie J’s alleged affairs (and secret babies). One of the few things that the two women have in common is that Stevie has cheated on both of them; if Joseline’s accusations from the most recent episode are accurate, Stevie has been hiding two children from her.

But Mimi was hardly a voice of sympathy once the scene was done! Here’s video of Mimi sharing what she really thinks about Joseline and Stevie J’s drama:

“I have mixed feelings about [that moment],” Mimi explained. “One, because I’m like, is this the same girl who took so much pride in f*cking up my sh!t? ‘I took ya man,'” Mimi continued, doing an impersonation of Joseline. “Is this the same girl? Crying to me! For about an hour.

“It was incredible,” Mimi went on. “And, I swear to God, I would have to say I was lying if I did not tell you, now, that I was not smiling inside. I was smiling.”

As Mimi herself put it, you never know what you’re going to get with Joseline–though it seems that you also can never be sure about Mimi Faust’s true intentions! We’ll find out if she uses Joseline’s vulnerability against her when Love and Hip Hop Atlanta Season 5 continues this Monday night on VH1.