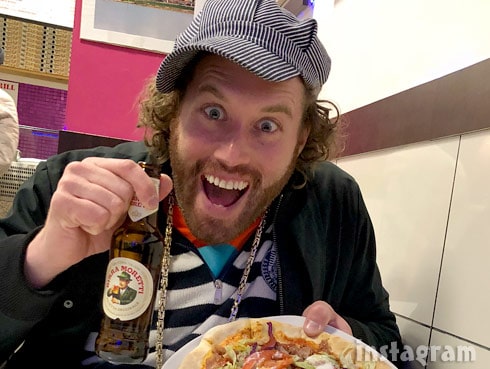 Comedian and star of HBO’s Silicon Valley T.J. Miller was arrested by FBI agents Monday night after he allegedly called in a fake bomb threat that caused the evacuation of an Amtrak train on March 18. According to police, T.J. (full name Todd Jospeh Miller) got into a drunken altercation with a woman on a train and called 911 claiming that the woman had a bomb in her bag. The delay in the arrests stems in part from T.J. getting the number wrong for the train he was on, causing a different Amtrak train to be stopped.

Miller was arrested upon his arrival at LaGuardia Airport Monday night and charged with “intentionally conveying to law enforcement false information about an explosive device on a train traveling to Connecticut,” according to a press release issued by the US Department of Justice earlier today. “He appeared today before U.S. District Judge Jeffrey A. Meyer in New Haven and was released on a $100,000 bond,” the release continues. “The charge carries a maximum term of imprisonment of five years.”

Here is the full US Justice Department account of what they believe T.J. Miller is guilty of:

As alleged in the criminal complaint, on the evening of March 18, 2018, MILLER called a 911 dispatcher in New Jersey and reported that he was on Amtrak Train 2256 traveling from Washington, D.C., toward Penn Station in New York City, and that a female passenger “has a bomb in her bag.” MILLER described the woman as having brown hair and a scarf. By the time Amtrak investigators received notice of the call and were mobilized to stop and search the train, the train was in Connecticut. Amtrak officials stopped Train 2256 at Green’s Farms Station in Westport, where passengers were directed to detrain, and bomb squad members boarded and searched the train. No evidence of any explosive device or materials was detected.

The complaint alleges that an investigator contacted MILLER, who was in New York, by phone. On the call, MILLER said the woman, who he described this time as having red hair and a red scarf, was carrying a “black bag carry on suitcase with a handle.” He said she kept checking her bag without taking anything out; kept asking the First Class attendant what the next stop was, and seemed to want to get off the train and leave her bag behind. The officer detected slurring in MILLER’s voice and asked if he had consumed alcohol that day. MILLER replied that he had consumed “one glass of red wine.” Asked if he suffered from mental illness, MILLER replied “no, absolutely not. This is the first time I’ve ever made a call like this before. I am worried for everyone on that train. Someone has to check that lady out.”

The complaint further alleges that investigators determined that MILLER had actually been traveling on Amtrak Train 2258, not 2256. When Amtrak Train 2258 arrived into Green’s Farms Station shortly thereafter, it was stopped, inspected, and eventually found not to contain any explosive devices or materials. During the stop, Amtrak officers interviewed an attendant from the First Class car where MILLER had been sitting. The attendant stated that MILLER appeared intoxicated upon boarding in Washington, that he consumed multiple drinks on the train, and that he had been removed in New York owing to his intoxication. The attendant also advised that MILLER had been involved in hostile exchanges with a woman who was sitting in a different row from him in the First Class car.

The complaint alleges that investigators identified and interviewed the subject female and determined that that she was not carrying any explosives, was not checking a “carry on suitcase with a handle,” was not “checking her bag without taking anything out,” and would have been largely out of MILLER’s view unless he repeatedly stood up to observe her over or around the intervening seat row, or rows. The complaint further alleges that MILLER, motivated by a grudge against the subject female, called 911 to relay false information about a suspected bomb on the train, and continued to convey false information to investigators while the public safety response was ongoing.

U.S. Attorney Durham stressed that a complaint is only a charge and is not evidence of guilt. Charges are only allegations, and a defendant is presumed innocent unless and until proven guilty beyond a reasonable doubt. 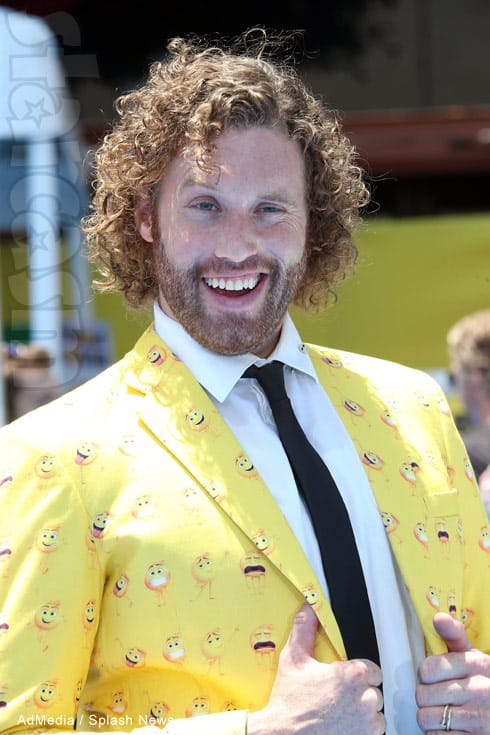 The official court filing reveals that T.J.’s stunt “caused 926 man hours-worth of delays, not to mention disrupting several law enforcement agencies and bomb squads in Connecticut and New York,” according to TMZ.

Author Alison Stewart was actually on the train that was evacuated, and she tweeted a video from the scene the night that it happened:

At least 16 police vehicles on the scene at @amtrak Green’s Farm station in CT. No one has td us anything—one officer mentioned a call and then backtracked. pic.twitter.com/Pi9IAmDvEW

T.J.’s social media accounts were also active on the day of the incident. He tweeted “Are most idiots assh*les?” and also posted this photo with a beer on Instagram — although it is unclear if the photo was taken the same day:

T.J. is currently on tour, and he returned to Twitter after his release to promote his show in Philadelphia:

What up Philadelphia. Illadelphia. Me and @CJSullivan_ are about to wreck it this weekend. My girl Cork is on the case, @HeliumComedy is the jam. And peanut butter.
See you there. MOST ALL SHOWS SOLD OUT so get them fixed fast. #roadrunner https://t.co/0YIOzL6wvd

I’m guessing that we can officially start the countdown on a “checking myself into rehab” announcement from T.J. before he manages to skate by with some sort of probation and/or community service sentence. Stay tuned.

VIDEO Hey fat-shaming school board president, that mic is hot!

Ashley Judd sues Harvey Weinstein for damaging her career, director Peter Jackson on her side