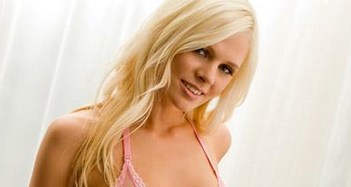 The sultry woman you see above is 21-year-old Jessie Lunderby, a detention officer from Arkansas.  She was featured as Playboy’s Cyber Girl of the Week for June 7th and her nude shoot has landed in her in hot water with her employers.  The Washington County Sherriff’s Office is investigating whether or not Lunderby violated an ethics code that is a required part of employment within their system.

In the bio portion of  (the following link is NOT SFW) the Playboy website it directly identifies Lunderby’s employment as a detention officer with Washington County.  Sheriff Tim Helder felt this reflected poorly on his staff and team.  He said:

“It just beams directly back to this organization and does it represent what we stand for which is to protect and serve the community, is that how we want to be represented.”

Lunderby countered this argument with the fact that she notified her superiors well in advance of her plans to bare all for the world famous magazine.  She stated:

“They knew about it, I informed them about it, I had plenty of time to say ‘no it can’t come out, no I don’t want it to be out,’ they never said no.  It’s kind of sad the way they are dealing with this whole thing it’s like they waited for this to come out and make a big deal out of it, it’s disgusting.”

The investigation is based on a code of ethics that Helder believes was violated when Lunderby took her clothes off, hurting the reputation of his department.  Lunderby claims that she was unaware of a code of ethics but the Washington County Sherriff’s Office states they have a signed code of ethics form from the jailer turned playmate.

Here is a video report on the controversy filed by Fox Providence:

Regardless of the signed form, Lunderby wants to know why she wasn’t informed sooner that the plans that she made her employer aware of only became a problem after the fact,  “They should have told me about this, they should have pulled this out and said hey.”

The investigation should come to a conclusion quickly, it is possible that Lunderby could be suspended or even fired.  She fears the latter.

Did Shaq use his son to deliver death threats to his Ex’s boyfriend?

Elizabeth Taylor is having a heart procedure to correct “leaky valve”