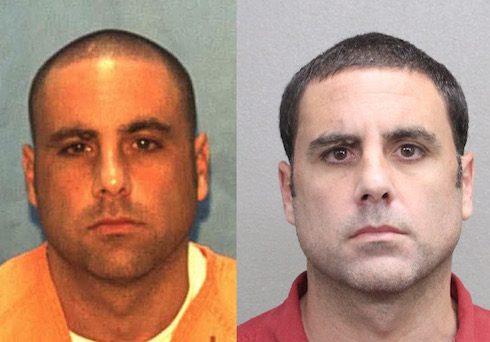 The Pablo Ibar 2018 trial — the fifth time Pablo will be tried for the triple homicide known as the Casey’s Nickelodeon Murders — was scheduled to begin weeks ago. But new developments for both the prosecution and defense pushed Pablo’s trial back yet again. And a new complication has just arisen, in the form of the judge originally scheduled to hear the case announcing her retirement just days before the latest deadline.

As we reported last week with the debut of the Felonious Florida podcast, the Pablo Ibar 2018 trial is merely the latest in a two-decade string of legal difficulties in the investigation of the 1994 murders of Butch Casey, Sharon Anderson, and Marie Rogers. (The left image in the above composite is Pablo Ibar’s mug shot upon entering Death Row in 2000; the right image is Ibar after being rearrested in 2016.)

Even though their murders were captured on tape by the surveillance cameras in Casey’s home, and even though one of the two murderers took off his mask as he exited Casey’s home, offering a relatively clear look at his face, the Casey’s Nickelodeon murders remain unsolved. (Click here for our extensive look at the Casey’s Nickelodeon murders, including the aforementioned surveillance footage.)

Seth Penalver, one of the two men originally charged with the murder, was on Death Row from 2000 until 2006, when the Florida Supreme Court overturned his conviction; Penalver was acquitted following a retrial in 2013. Pablo Ibar is the second man. He’s the one who allegedly took off the shirt he’d been wearing as a mask and unwittingly showed investigators his face. And he’s been on Death Row for the murders since 2000. The upcoming retrial is Pablo’s last, best chance to go free.

With stunning speed, investigators built a against Pablo Ibar

Pablo Ibar was actually in police custody, arrested on a home invasion robbery charge, when the Casey’s Nickelodeon investigators realized they might have a match for the face on the tape. As Felonious Florida put it, when Detective Paul Manzella showed Ibar a copy of the image from Casey’s security camera and asked him “Where did I get this photo of you, Pablo?”, Ibar just stared at the image, “then laid his head down on the table.”

From there, Manzella backtracked, connecting Ibar to the home invasion in Miami-Dade County for which he’d been arrested and attempting to link it to evidence from the murders at Butch Casey’s house in Broward County. He tried to match bloody footprints found at both crime scenes to Ibar’s shoes. He put Ibar in a lineup and brought in Casey’s neighbor Gary Foy, who “immediately identified” Ibar as the man “he saw riding in the passenger seat of” Casey’s Mercedes on the morning of the murders.

And, in a detail that wouldn’t pay full dividends until over 20 years had passed, he linked to Ibar a T-shirt found outside Butch Casey’s house — the shirt the second murderer had been wearing as a mask, then removed as he left the house. The shirt bore a logo for Consolidated Electric Supply — a company that “had a business relationship with the employer of Pablo Ibar’s mother.”

Then came the man who “blew the case wide open.” John Klimeczko, a former roommate of Ibar’s, identified Ibar as the man in the surveillance footage — and further claimed that the first man, clad in a ballcap and sunglasses, was Seth Penalver. Klimeczko also told police that “residents of the [flophouse]” where he once lived with Ibar “often exchanged clothing if [it] fit.” That detail in turn fit with something one of Ibar’s accomplices in the Miami-Dade break-in had said: that he’d borrowed the shoes with which he’d made matching bloody footprints from Ibar.

Penalver and Ibar are tried together, then separately — but the charges don’t stick

On August 31, 1994, just over two months after the Casey’s Nickelodeon murders, Ibar and Penalver were indicted on first-degree murder charges. At trial, though, the lack of physical evidence connecting the two men to the crime scene became a problem too big for the surveillance footage to overcome.

Several witnesses changed their stories; Klimeczko “even claimed he had no memory of his statements,” despite simultaneously acknowledging that the voice in the police interrogation recordings was his own.

The nine-month trial — which began almost three years after Casey, Anderson, and Rogers’ murders — stretched from 1997 into 1998. Jury deliberations dragged on for 25 hours. And ultimately, the jury only voted 9-3 to convict the two men.

It was a different story two years later. Following the hung jury, the prosecution decided to go after Ibar and Penalver separately. They got death sentences in both cases. Pablo Ibar, born April 1st 1972, became an inmate on Florida’s Death Row on December 6th, 2000. He would spend the next fifteen-and-a-half years of his life there.

The same 2006 Florida Supreme Court decision that overturned Seth Penalver’s conviction did nothing for Pablo Ibar. But in February of 2016, the state Supreme Court ordered a retrial for Ibar, after finding that Ibar’s original attorney, per the South Florida Sun-Sentinel, “failed to retain a facial recognition expert to challenge the prosecution’s evidence that Ibar was at the scene of the crime.”

What’s more, the court found that Ibar’s new defense team — paid for by a Spanish non-profit organization, thanks in part to Ibar’s Spanish citizenship and “celebrity status” in that country — had introduced more than enough new evidence to warrant a second look.

From the Florida Supreme Court’s 2016 decision:

Ibar has established prejudice, given the relatively weak case against Ibar with no physical evidence linking him to the crime, the critical role of his identification derived from the video, and the errors we previously identified in Ibar’s direct appeal….Simply put, we cannot and do not have confidence in the outcome of this trial.

But a key piece of evidence in the Pablo Ibar 2018 trial is something that was only circumstantial in 1994. The Consolidated Electric Supply T-shirt found outside Butch Casey’s house has since been tested for Ibar’s DNA — and found a partial match. A 2010 DNA test returned nothing, but a 2016 re-examination by the same lab found that “Ibar was a major contributor of the partially recovered DNA.

“The probability it was a different Caucasian man,” said the Sun-Sentinel report, “was one in 11 million. The odds shrink to approximately one in 35 million among Hispanic men.”

Originally, the Pablo Ibar 2018 trial was scheduled to begin on February 28th. According to Broward County court records, it’s been delayed several times due to requests from the prosecution and the defense. The most recent update states that the extended deposition deadline is now April 17th, after which date the next phase of the pre-trial will begin.

However, an unforeseen legal hurdle could delay Ibar’s fifth trial indefinitely. On April 4th, Judge Lisa Porter, the Broward Circuit judge assigned to hear the case, announced her retirement, effective June 30th. Judge Porter, who is finishing up “a decade [on the bench] following 20 years as a prosecutor,” didn’t comment on any of the cases on her docket in making her announcement.

You can listen to or download “The Faces of the Killers,” the latest Felonious Florida podcast episode, for free via iTunes here.