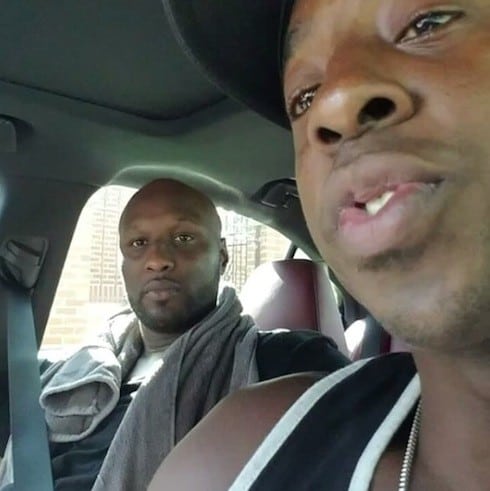 Did Lamar Odom have a stroke? Is he dying? Questions about the former NBA and reality TV star have been swirling for weeks, ever since a report alleging that Lamar was close to death surfaced. The Life & Style family was responsible for that report, which claimed that Odom had suffered another overdose and stroke, and severely damaged his internal organs in doing so. Estranged wife Khloe Kardashian was said to be preparing for the end, and Odom’s assorted friends and family members were being told that he had approximately three months to live.

However, we’ve since gotten a Lamar Odom health update from none other than the man himself–and it’s a relief to say that he looks (and sounds) great. Oneil Pryce, Lamar’s personal trainer and the proprietor of the Real Deal Fitness Gym in East Setauket NY, told Us several days ago that he was working with Lamar on the regular. The big man was “taking things slow,” Price said, and his six-foot-ten client was making tremendous strides. Now, thanks to Oneil’s Instagram account, we have visual confirmation that Lamar both looks and sounds great:

Lamar Odom is in good spirits another great workout good to see him smiling and laughing again.

“How I look, baby,” replied Lamar, with a sly smile.

“How was the workout?”

“All them haters out there?”

Odom’s trainer was also responsible for the first of the reports about Odom’s potential improvement, which came as a direct response to the stories of Lamar’s imminent death. “From what I know [Lamar is] sober,” Oneil explained, “because right now he is focused and that is the state I have him in right now. I have been letting him know that [this] is going to be a rough road, a hard road….So right now, he has been drinking his water, staying low key and pretty much staying out of sight of everybody else, all of the negative stuff.”

(Photo credits: Did Lamar Odom have a stroke via Instagram)