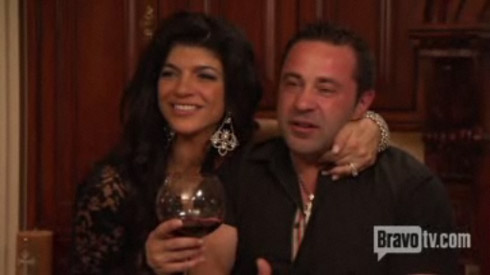 At approximately 1:45 a.m. on January 14, 2010 Joe Giudice (husband of Teresa Giudice from Bravo’s Real Housewives of New Jersey reality series) flipped his Ford pickup truck and smashed into a telephone pole less than three miles from the couple’s home in Towaco, New Jersey. (You can read all about that HERE.)

Though the officer on the scene claims to have smelled alcohol on his breath and a blood test taken later indicated he was over the legal limit, Joe still denied that he had consumed alcohol prior to the accident during the taping of tonight’s episode of RHONJ!

Here’s the clip in which Joe tells his side of the story of his DWI arrest to Jacqueline Laurita and her husband, Chris, who have come over for dinner. (As a bonus you get a brief scene with Danielle and her gangsta pal Danny Provenzano talking about Joe’s arrest as well as the health benefits of the antioxidants found in blueberries.)

In the clip Joe explains that he was just tired and that he ran off the road after yawning real big and closing his eyes for just a second. Hmmmm….

Those Giudices sure can talk a good talk about not going broke and not drinking and driving, but it doesn’t appear they can walk the walk! (Stagger the stagger?)