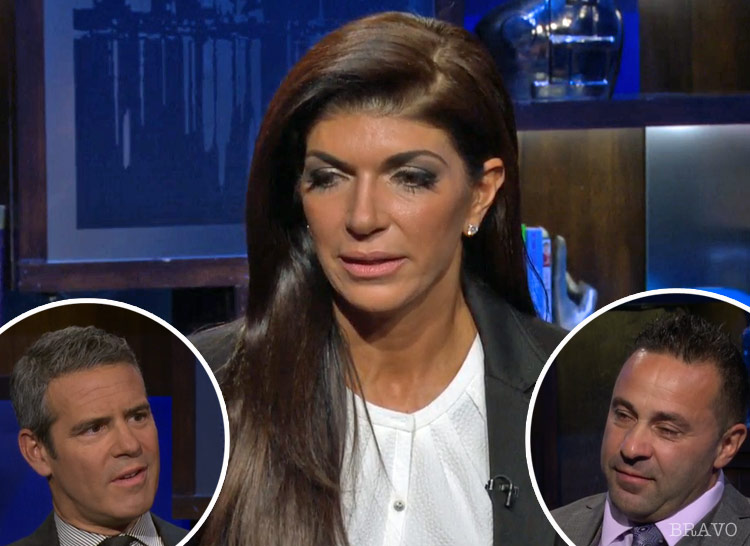 If the preview videos for Andy Cohen’s already controversial interview with Teresa and Joe Giudice are any indication, tonight’s episode of Watch What Happens: Live will most certainly be must watch (or DVR) TV!

In this first clip, Andy asks Teresa what her reaction is to receiving a 15-month prison sentence after many believed that she would avoid having to serve time. As you would imagine (this interview was taped just one day after the pair were sentenced), Teresa is nearly lost for words and in an obvious state of shock as she tries to explain how she’s feeling:

Here’s what was said in case you can’t catch the video.

Andy: Teresa, you got 15 months. There was a lot of speculation that you wouldn’t serve at all.

Teresa: Um… I was getting so nervous, I was so nervous yesterday that I was shaking. My nerves were pulling. At one point I couldn’t even move my fingers. They were like stuck – I couldn’t open my hands. My nerves were shot. I’ve had sleepless nights. I mean, of course, I was shocked. It was very unexpected. I don’t even know what to say. I really don’t know what to say.

Andy: When you addressed the court you said, “It’s time for me to wake up.” Do you think you’ve been in denial, it’s a claim that many have accused you of in the past?

Teresa: I do need to read things before I sign them. I do need to understand things before I sign them. I’m a trustworthy person and sometimes I take what other people say and I just believe them, I trust them and I can’t do that anymore. I gotta make sure I fully understand something or fully read it or find a contract lawyer that could help me. Because I don’t read contracts every day. I want to get better at it.

In the other dramatic clip shared by Bravo, Teresa talks about how supportive her daughter Gia has been throughout the ordeal. While she tries to get through it, Joe starts to cry:

Teresa: “It’s going to be okay.” She was being strong for me I could tell. She was like, “Mommy don’t worry about it. I will be there. I’ll help daddy with the girls. That will make me a better mom – to help prepare me for when I’m a mom.” And I was like, “Oh my God,” it like broke my heart when she said that.

Today I get a phone call from the guidance counselor (turns to Joe and says “I don’t know if I told you?”) and she told me that she met with Gia… Because everyone has been great, like the schools, family and friends… A lot of people have been reaching out and the school said that they spoke to her. They’re going to take her out of gym period once a week and just talk to her to see how she is doing and she says she likes that idea and then she said the one person she’s worried about is me.

The truth is out! Somebody on Real Housewives of New Jersey was a stripper