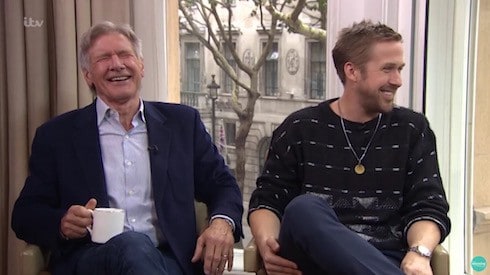 Blade Runner 2049 is a movie about a dystopian hellscape. Press tours, for high-profile actors, are often a dystopian hellscape. So 2049 co-stars Harrison Ford and Ryan Gosling were already treading on unsteady ground when they set out to promote their new movie together: an endless barrage of banal questions, Ford’s legendary crankiness, the already well-worn anecdote about how Ford accidentally punched Gosling in the face while filming–how long could the two possibly hold out?

The answer, it turns out, was right up until they sat for an interview with Alison Hammond of ITV’s This Morning, a daily chat show in the UK. Only instead of the monotony of their situation getting to them, Ford and Gosling found themselves reduced to peals of helpless, whiskey-soaked laughter, thanks to Hammond’s absurdity (and the fact that she openly admitted she’s never seen the original Blade Runner, which both Ford and Gosling found hilarious).

It’s almost not worth recapping the video for you. Just know that, contrary to your basic polite chitchat, the following things all happen: Inside of two questions, Gosling has already dipped into the Johnny Walker Black from the minibar; a couple of questions later, Hammond–who later says she doesn’t even drink–joins him. Ford then swipes Gosling’s glass. Hammond wonders whether Gosling (whose affinity for knitting has reached meme status at this point) knitted the very sweater he’s wearing. Ford says his response to the phone call alerting him to a Blade Runner sequel was “So what?” Gosling gives up trying to maintain any semblance of interview-face and goes over to help out with the camera crew. After Ford answers the last question with clichéd poignance, Gosling drops the empty bottle of scotch like a mic.

Oh–and all three of them almost completely forget to talk about the movie. Here’s the Harrison Ford and Ryan Gosling This Morning full interview. Let it perk up your day:

Blade Runner 2049 opens on October 6th, but this clip is already here.