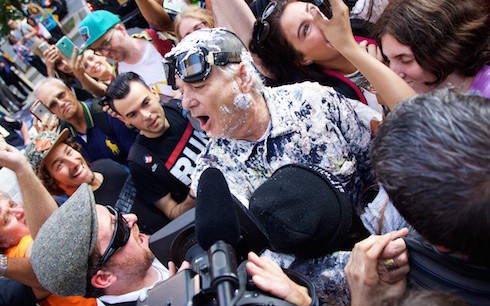 Bill Murray was the featured guest on the second-to-last episode of David Letterman’s late-night program yesterday. He entered the stage by jumping out of a giant cake; we were treated to a Murray Retrospective featuring highlights from his 33 years as a guest on Letterman’s shows; Murray closed the bit by running out of the theater in his cake-strewn jumpsuit to gather volunteers and stop Manhattan traffic by singing “More Worldwide Pants”–the name of Letterman’s production company–to the tune of “Give Peace A Chance.” Right there, in the middle of the street. It was pretty great. Which is to say that it was typical Bill Murray.

The other neat thing that happened during Murray’s appearance was he and bandleader Paul Shaffer dropped a few tidbits of information regarding Murray’s long-rumored Christmas special. Remember? The one Sofia Coppola told us about months ago, when it was practically the Christmas season? And then we never heard anything else.

Well, now we know some more stuff. For starters, Jenny Lewis is in it. Jason Schwartzman has a role; Rashida Jones, late of Parks and Rec, will appear. Along with the aforementioned Mr. Shaffer, who assured everyone watching that everyone in the special is either “great” or “fantastic” or both. The relevant portion of the interview starts at about 2:33, if you’re interested:

Furthermore, when George Clooney stopped by to chat with Letterman last week, he gave us even more to try and wrap our heads around. “I sit on a piano bench,” Clooney recalled, “with Paul and, pretend to sing, which they don’t let me. And I [ride] in a sleigh with Miley Cyrus being pulled by the Rockettes.”

Plus, Sofia Coppola is directing the whole shebang. If it looks anything like the time Murray stopped by Letterman’s show to have hot cocoa and shower the crowd with mini-marshmallows he pulled out of his coat pocket, we’re in for a holiday treat of screwball proportions.