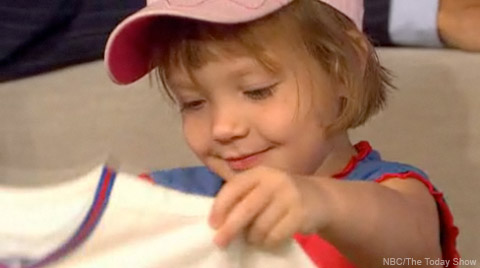 15 minutes of fame doesn’t get any cuter than 3-year-old Emily Monforto, who appeared on The Today Show this morning after famously tossing a foul ball caught by her father at a Philadelphia Phillies game back onto the field. Each of the Monforto family, which included Emily, father Steve, mother Kathleen and 15-month-old sister Cecilia, received a Philadelphia Phillies Jersey with the number 09, and Steve also got a baseball signed by Jason Werth, the player who hit the original foul ball that Emily hurled back.

And if there was any doubt that Emily is a true Phillies fan, she erased it when asked what was her favorite part of going to Phillies games and she responded with “Raúl Ibañez,” who is Philadelphia’s starting left fielder. After that, she did mention an affinity for hot dogs and cotton candy, but they obviously came in a distant second to Mr. Raúl Ibañez!

What a great, joyful story! We need more Emilys and less Jon Gosselins! If you want to see more of the EM, CLICK HERE to check out a different video of the original “throwback” as well as a driveway interview with her where she handles the pressure with panache! (This is much better than the last story I covered about the Philadelphia Phillies and a fan throwing something onto the field.)