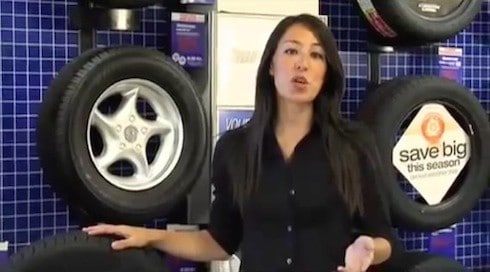 What is Joanna Gaines’ age? And how long have she and Chip been together? The Fixer Upper star recently celebrated her birthday with friends and family, and shared a few fun photos of the event on social media. And, to supplement that, we’ve unearthed a piece of Fixer Upper lore: a throwback Jerry Stevens Firestone Tire commercial of the sort that wooed Chip Gaines back in the day!

First, though, here’s a look at what you can expect to find when you come downstairs on the morning of your 38th birthday in the Gaines household, as Joanna recently did:

The best birthday surprise was waking up to the most amazing bkfst and a room full of all my favorite superheroes. @chippergaines

THANK YOU for all the birthday wishes today!! Y’all are the sweetest! Also- Thks to all my friends who got me a plant today… I officially need a new greenhouse now. ? #plantlady A photo posted by Joanna Stevens Gaines (@joannagaines) on Apr 19, 2016 at 7:35pm PDT

Now–for that throwback video! Most Fixer Upper fans are well aware of the role that Jerry Stevens Firestone played in bringing Joanna and Chip together; Chip even cemented the story’s importance by sharing it in the first episode of Fixer Upper Season 3. But, in case you’re unaware, here’s the deal: Joanna’s dad owns a Firestone store in Waco, where Joanna once worked. She also starred in a handful of local commercials for the store, and, when Chip met her, he exclaimed, “Hey, you’re the girl in the commercials!” Chip was so smitten that he wound up getting oil and tire changes on his truck way more often than necessary, in order to have an excuse to bump into his beau. The two dated for about a year, and married in 2003.

This video doesn’t go back quite that far–if the date in the intro is accurate, it’s from 2008, or six years before Fixer Upper premiered. But it’s still a fun little find:

Fixer Upper is currently between seasons, but HGTV seems to be showing daylong marathons of the show every Tuesday. In the meantime, remember that #season4iscoming!