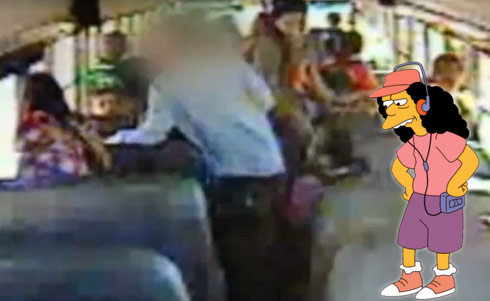 An Arizona school bus driver has resigned after he locked up kids who he felt were being too rowdy on his bus, not allowing them to get off all the while scaring the bejesus out of many of them and their parents.

Nearly 40 kids were inside as the driver gave them the what for about their behavior. As tensions rose, a parent attempted to pry open the door and the driver is heard on surveillance footage proclaiming, “You break that door you’re going to be buying a new one. Your kids will get off the bus when I’m done with ’em.”

The driver eventually drove away from the stop with all the kids still on board. One parent, Adam Kautman, called 911 saying, “He won’t let any of our kids out. The kids are crying. He’s screaming at us… He’s actually driving away with all our kids. He’s got all our kids on the bus.”

The driver took the kids back to their elementary school where they were released from the bus. Thankfully no injuries were reported.

An investigation was launched and the driver was put on administrative leave before making the decision to resign.