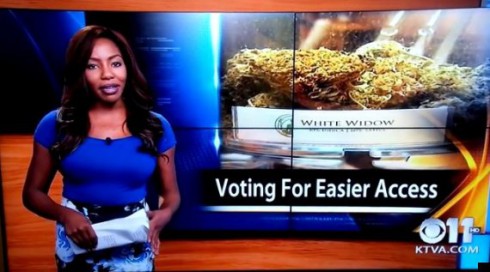 Anchorage TV news reporter Charlo Green quit her day job in a fairly shocking style after delivering a report about the efforts to legalize marijuana in Alaska.

“Now everything you’ve heard is why I, the actual owner of the Alaska Cannabis Club, will be dedicating all of my energy toward fighting for freedom and fairness, which begins with legalizing marijuana here in Alaska,” the KTVA reporter announced on live TV on Sunday. “And as for this job, well, not that I have a choice, but f**k it, I quit.”

Charlo then walked off set as the camera cut back to the stunned anchorwoman. The dramatic incident was captured by viewers. (Video includes the F-bomb.)

KTVA News Director Burt Rudman promptly issued an apology on Twitter, saying “the employee has been terminated” — even though Charlo clearly quit. For her part, Charlo quickly got to work by starting an Indiegogo fundraising campaign so the Alaska Cannabis Club can inform voters about the upcoming Ballot Measure 2.

“I’m Charlo Greene, the president and CEO of the Alaska Cannabis Club — Alaska’s only legal medical marijuana resource. I just quit my news reporting job on live TV to announce that I am redirecting all of my energy toward helping to end a failed drug policy that has ruined the lives of far too many Americans,” she said in the Indiegogo summary. “Few people fighting for marijuana legalization in Alaska are as media savvy, well educated on the marijuana industry, passionate, professional and completely dedicated to passing this initiative as me, the only person in Alaska that has had the balls to face the injustice of Alaska’s medical marijuana catch-22 and do something about it.”